Good morning everybody. This is The Daily Bone and I’m your humble doggie host Chester L. W. Stephens.

My esteemed colleague Joseph (Joey dog) Stephens watched more of the Olympics last night. Because it went on for so late, we were too sleepy to write a report right afterwards. 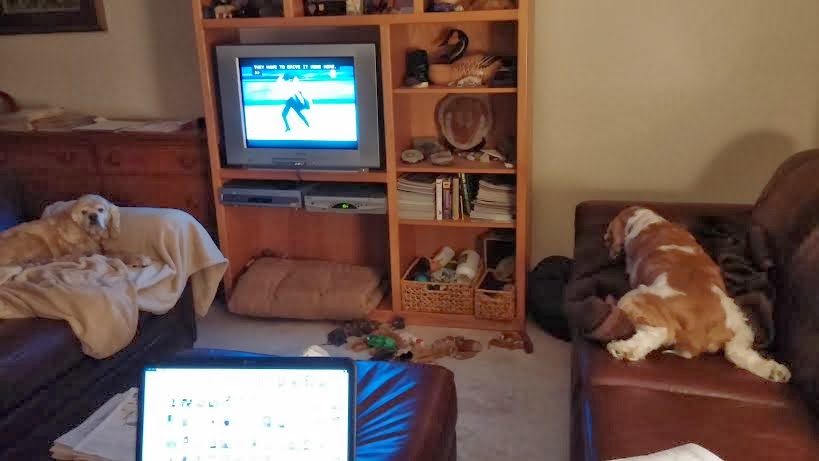 We were amazed to see a new sport called Slope Style in which the human had his feet attached to a thin board about the size of an ironing board (maybe Ironing Board Man designed it!) that he used to slide down a hill. Again, we see the behavior of going down a mountain really fast. Instead of going straight down, though, the human went over a series of ramps, stair rails, and pipes. Going up the ramps launched the human high into the air, where he did several acrobatic flips and twists. Then he somehow landed without breaking any bones, or careening into the crowds on the sidelines. Yipes! Oh, there was one more interesting thing we noticed during that competition. There was a little drone thing hovering like a bug above the course. We watched closely to see if anyone would snatch it out of the air! Or maybe it was one of those Amazon delivery drones trying to give the guys their new copies of the latest best-selling Ironing Board Man movie.

Then there was a type of skiing that actually didn’t involve going down a mountain at warp speed. The humans had long sticks on their feet and in their hands which they used to propel themselves along a snowy track that was mostly flat. After going around the track a few times, they had to stop and shoot targets with rifles they carried on their backs. Wow, we’d like to have one of those guys do that in our yard and use the squirrels for target practice. Oh, and there's an evil squirrel right now! And that's a memo.
Posted by C.L.W.STEP at 8:30 AM