Hello. This is your food-minded doggie reporter Joseph (Joey dog) Spaniel and this is The Daily Bone yum yum delicious edibles column. 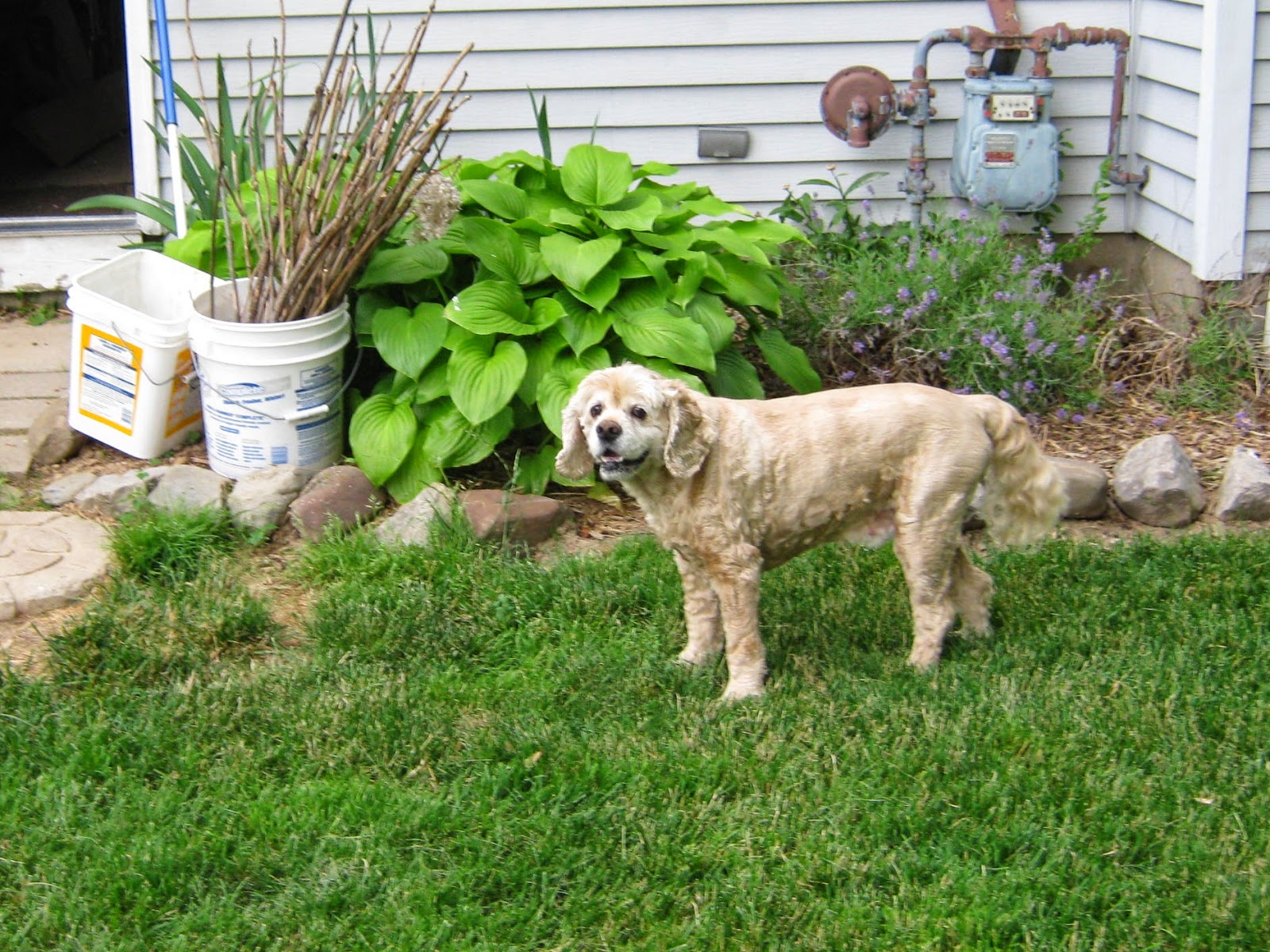 Look what I found on top of the compost pile! I’m a very good scavenger! 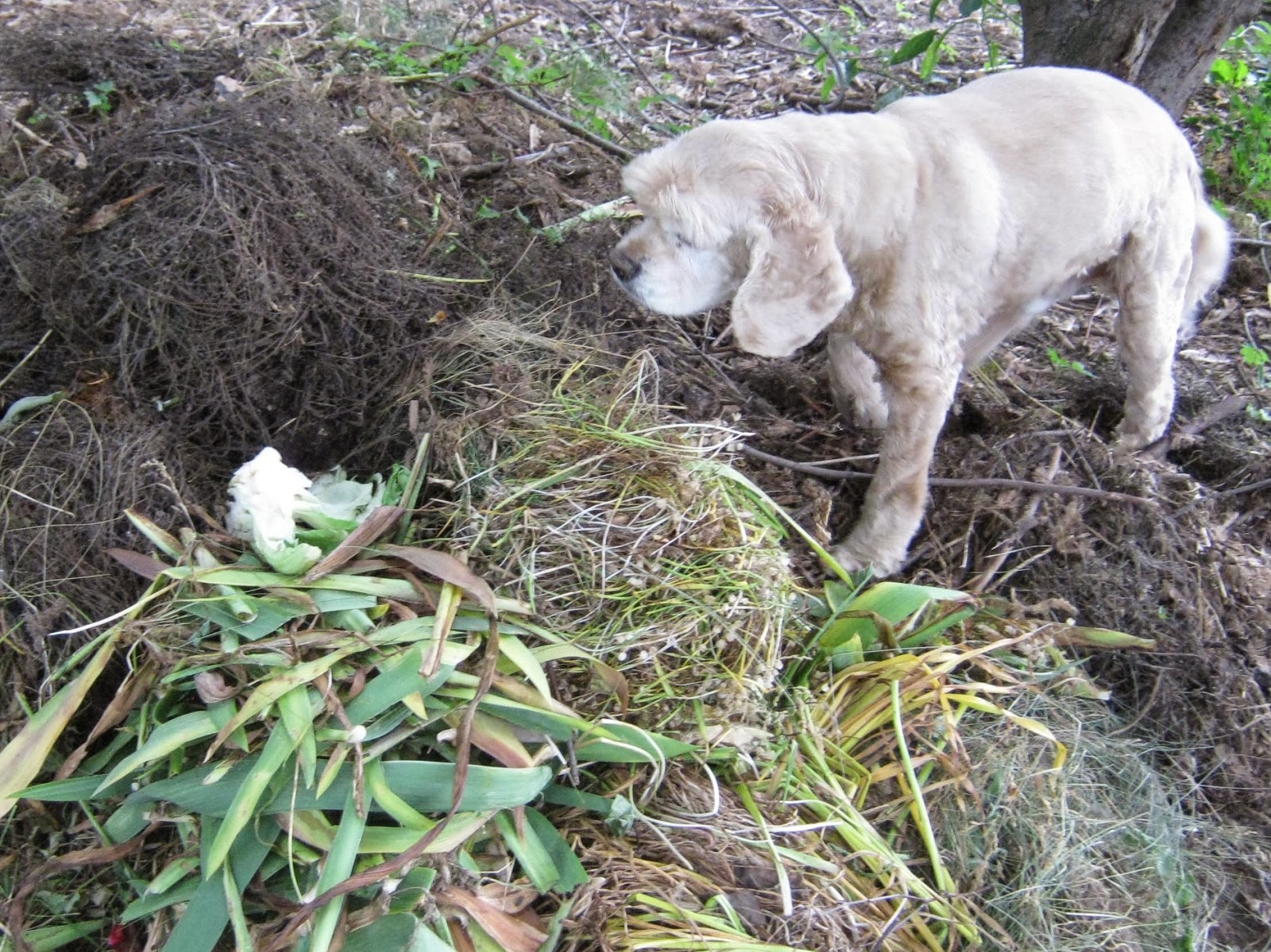 It’s a cauliflower heart with some leaves still attached.


Don’t tell anyone I stole it. No one will notice it’s missing. Anyway, it’s good to eat a lot of vegetables. They’re low in calories and have a lot of fiber. What more could a doggie ask for? I mean, why would the humans just toss it out in the compost when it’s perfectly good for eating? Cruciferous vegetables are completely harmless for doggies and full of vitamins. Why give it to the bugs and worms? What could possibly go wrong? 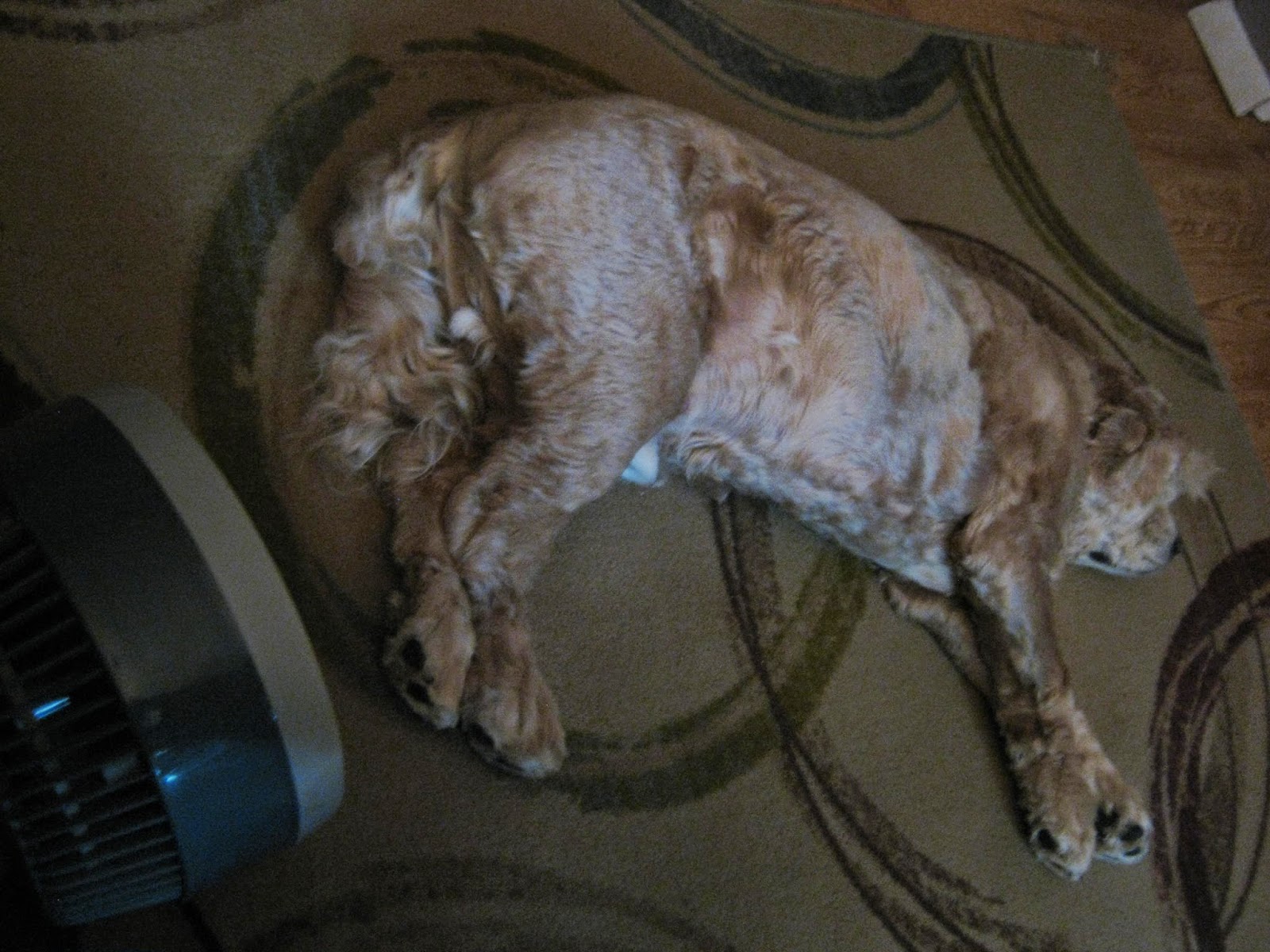 Seven Days in a Row!

My ghost writer is working seven days in a row that started last Friday. That means she'll be gone for eight hours every day until next Friday. Then when she gets home she's tired and grumpy. My esteemed colleague Joseph (Joey dog) Spaniel has been to the nursing home, and he says there are lots of nice old people like our Oma, and lots of food and exotic scents. Sounds OK to me.

So Joey dog and I will have to write The Daily Bone all by ourselves today. We couldn't think of any witty anecdotes, scathing political commentary, or epic adventures. So we're just going to show some of our favorite photos.

Hi doggies! This is a special TDB post just for you! So perk your ears up and check out this video! It's a real life squeaky toy! 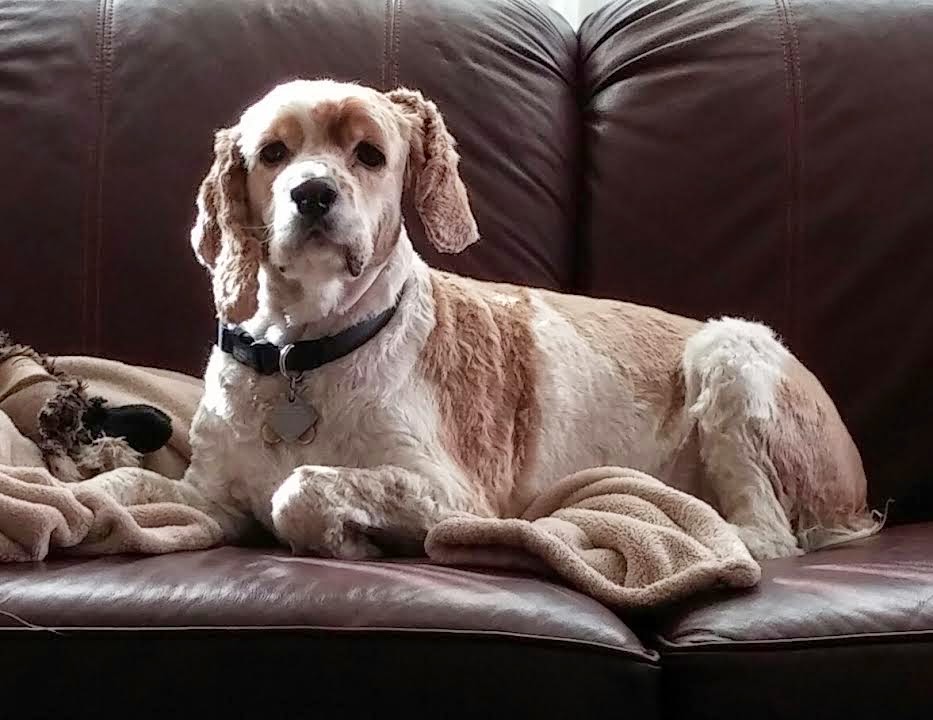 Hello again. I'm your comestibles expert reporter and Yum Yum Coalition founder Joseph (Joey dog) Spaniel. I will now talk about the next strange fruit in this culinary series. 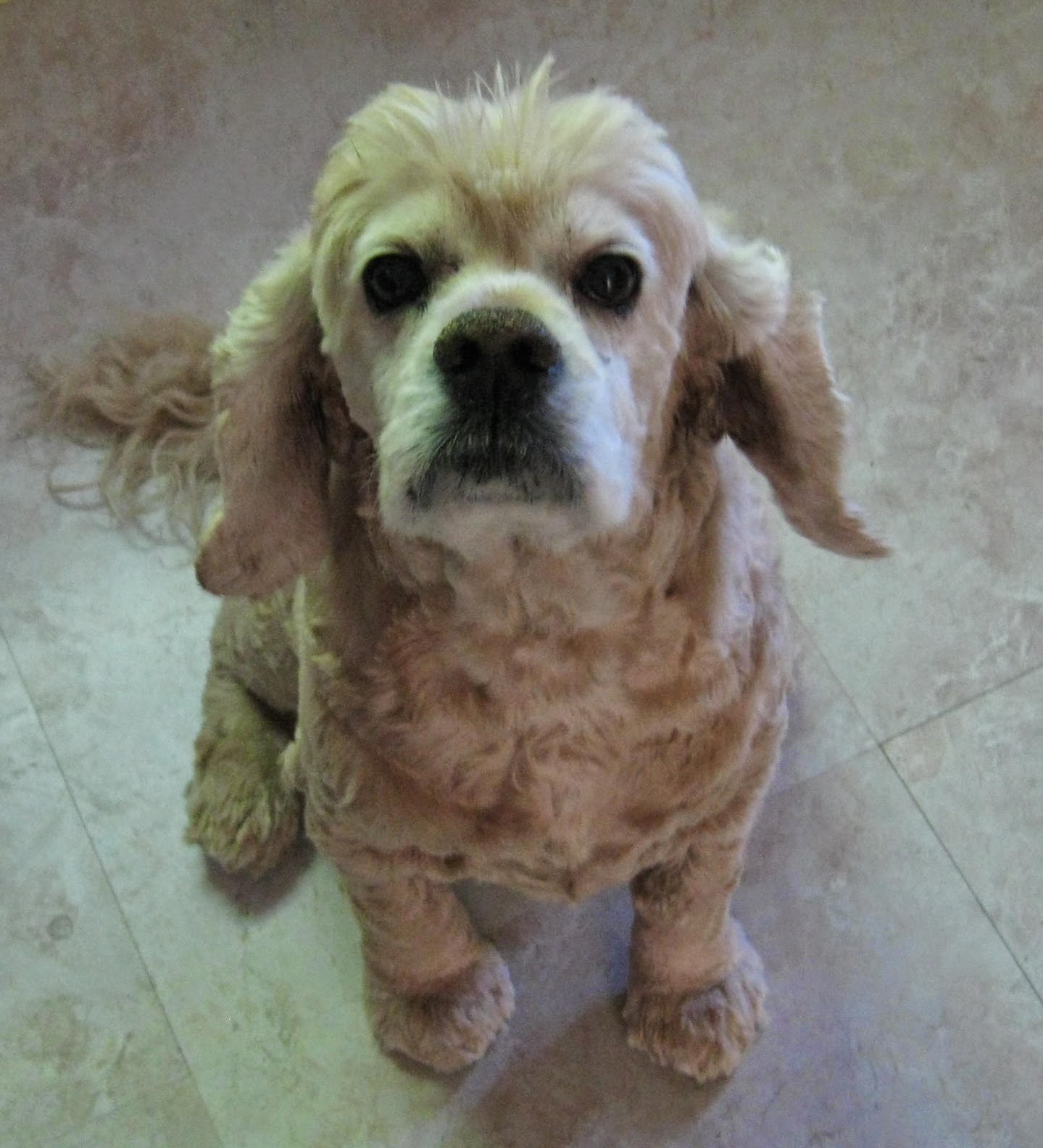 In honor of the World Cup soccer games in Brazil right now, my associate Chester L. W. Spaniel and I decided we should feature something the size of a soccer ball.

It’s time for the Yum yum report. I’m your culinary doggie host Joseph (Joey dog) Spaniel. The humans have a wide variety of fruits they eat. Some of these are quite delicious for doggies. One of the more strange ones is the pineapple. Oddly, it is neither an apple, nor does is grow on pine trees. 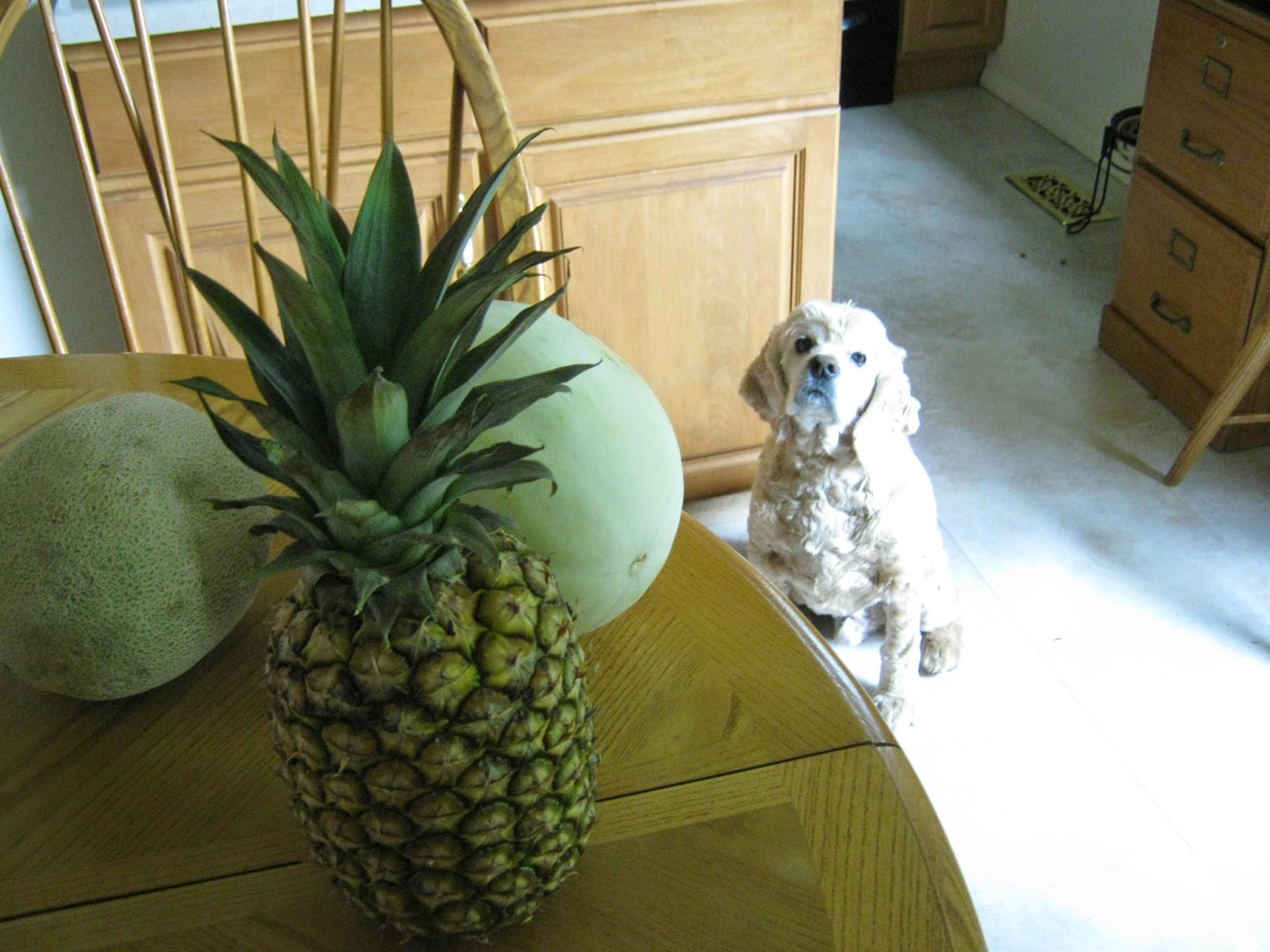 My colleague Chester couldn’t figure out what to do with it other than sniff the tantalizing aroma. But being the yum yum expert, I simply waited for my human to do the preparation work. Using a big knife, she cut the top and bottom off, and then carved off the thick, prickly skin. 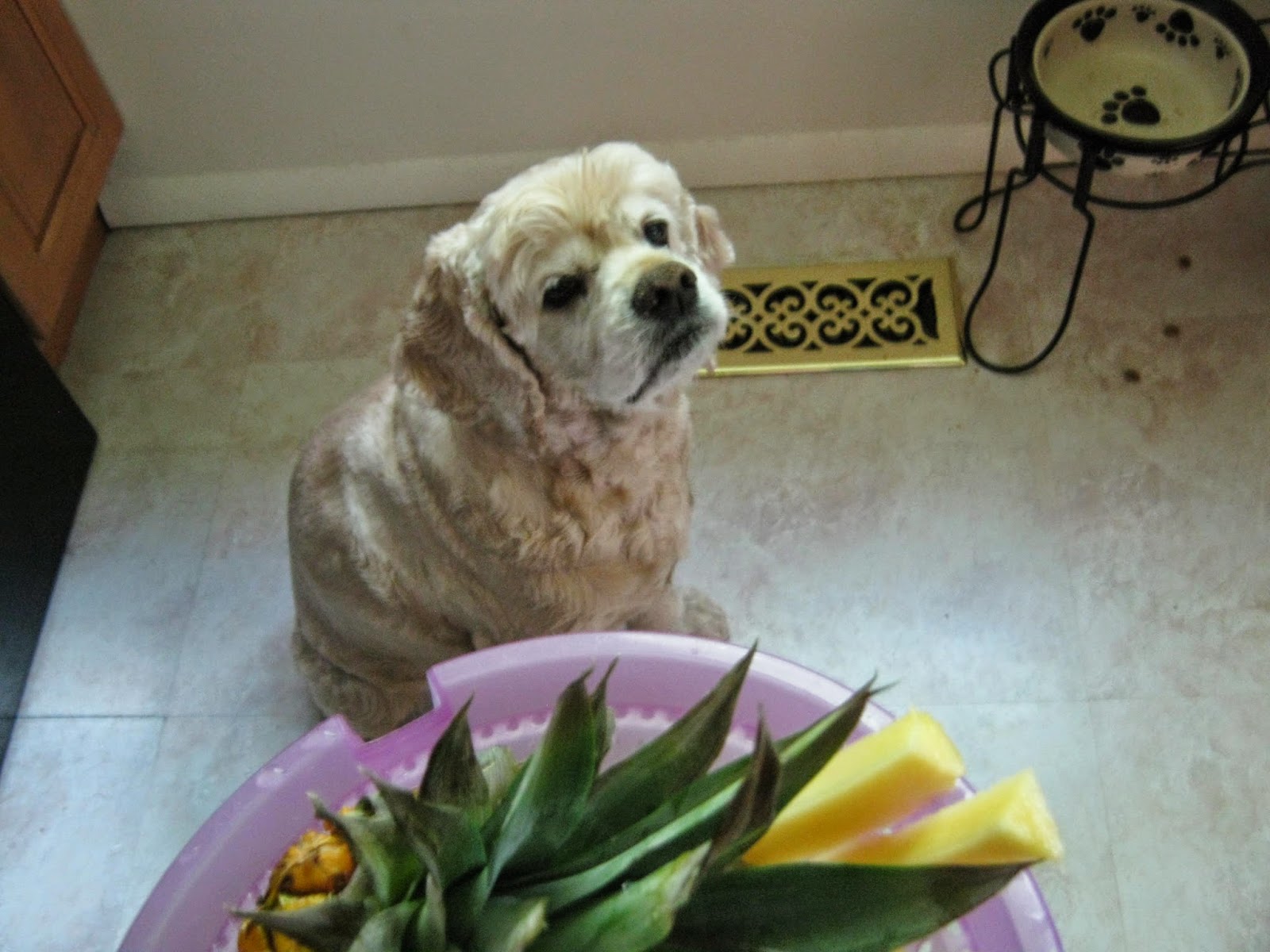 These pieces, along with a couple over ripe bananas, were taken outside and placed in the compost bucket. 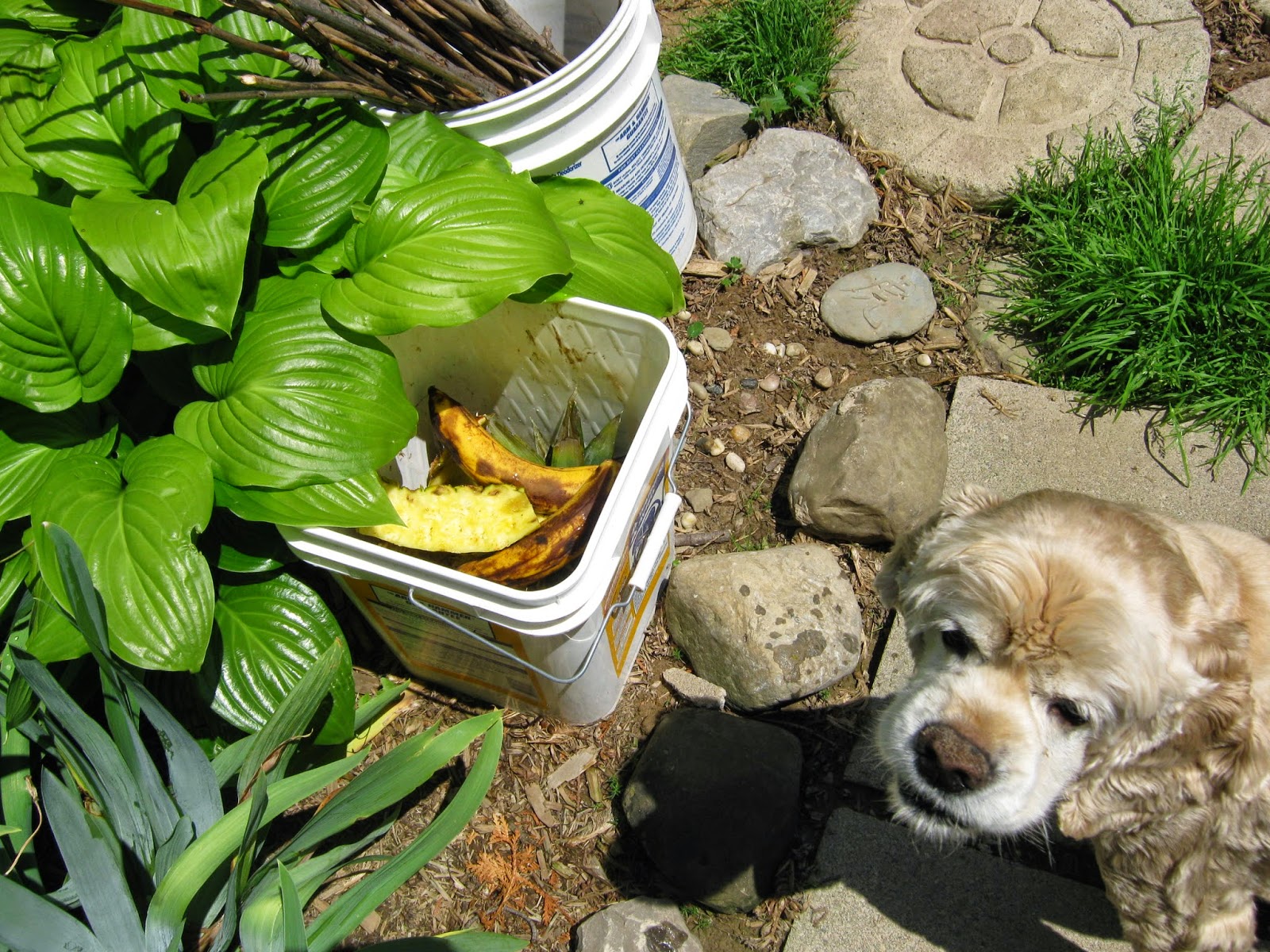 What was left was a whole bowl of delicious yumminess! And that’s a memo. 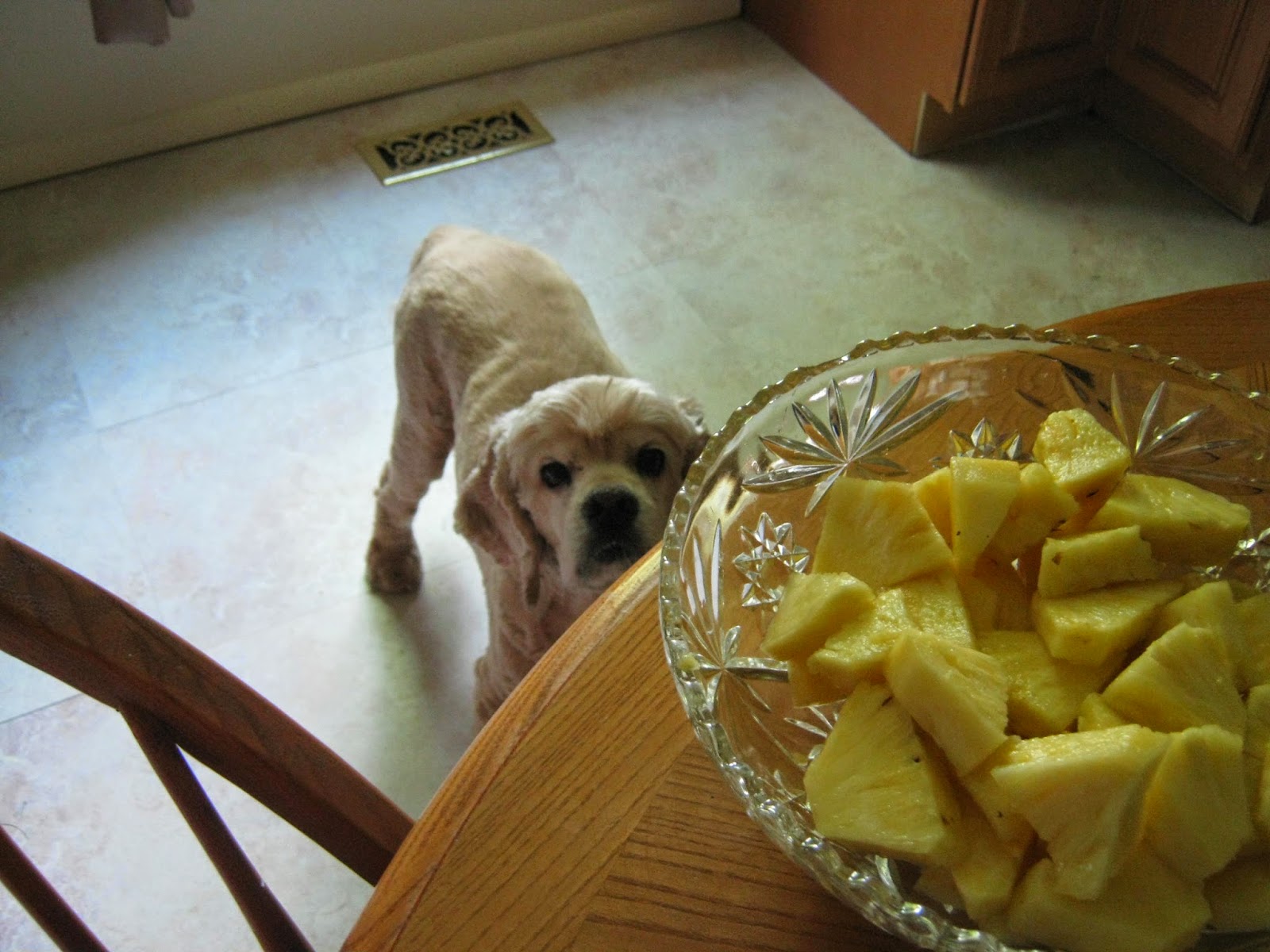 Bunny in the Rain

Hello. This is The Daily Bone and I’m your trustworthy doggie reporter Chester L. W. Spaniel.

My ghost writer is finally done with her research paper. Hooray! Now she’ll have more time to devote to the important stuff, like the local doggie news, weather, political commentary, yum yums, and funny videos and web sites. She hasn’t even had time to take many pictures! And then—oh the horror—yesterday the internet went down in our area most of the evening. Oh no! It’s taken us till noon today to get things up and running again. So after all that, we only have one item in our report today and here it is: 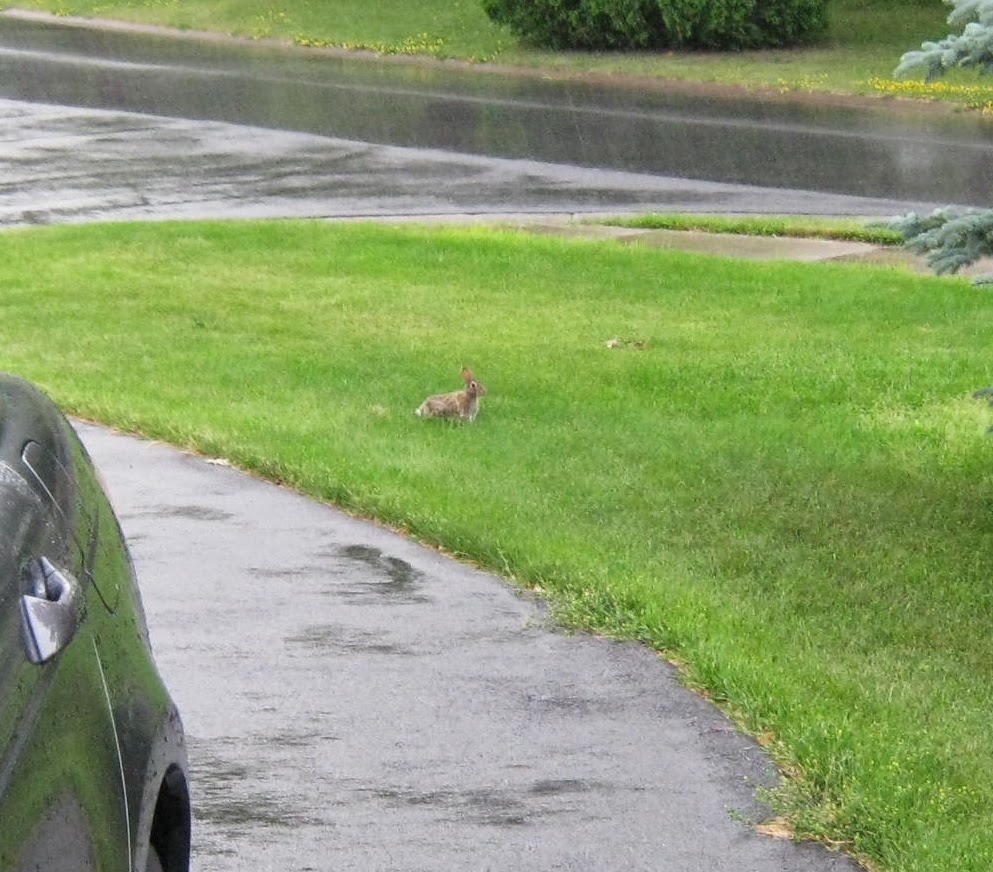 Apparently the Bunny Militia thought the recent rainy, gloomy weather was the perfect cover in which to advance their annual invasion. In fact, we caught a few photos of them with the spy cam. As you can see, Corporal Bunbun is slowly sneaking up our front lawn. He took refuge under the blue spruce tree for quite a while to keep from getting soaked. 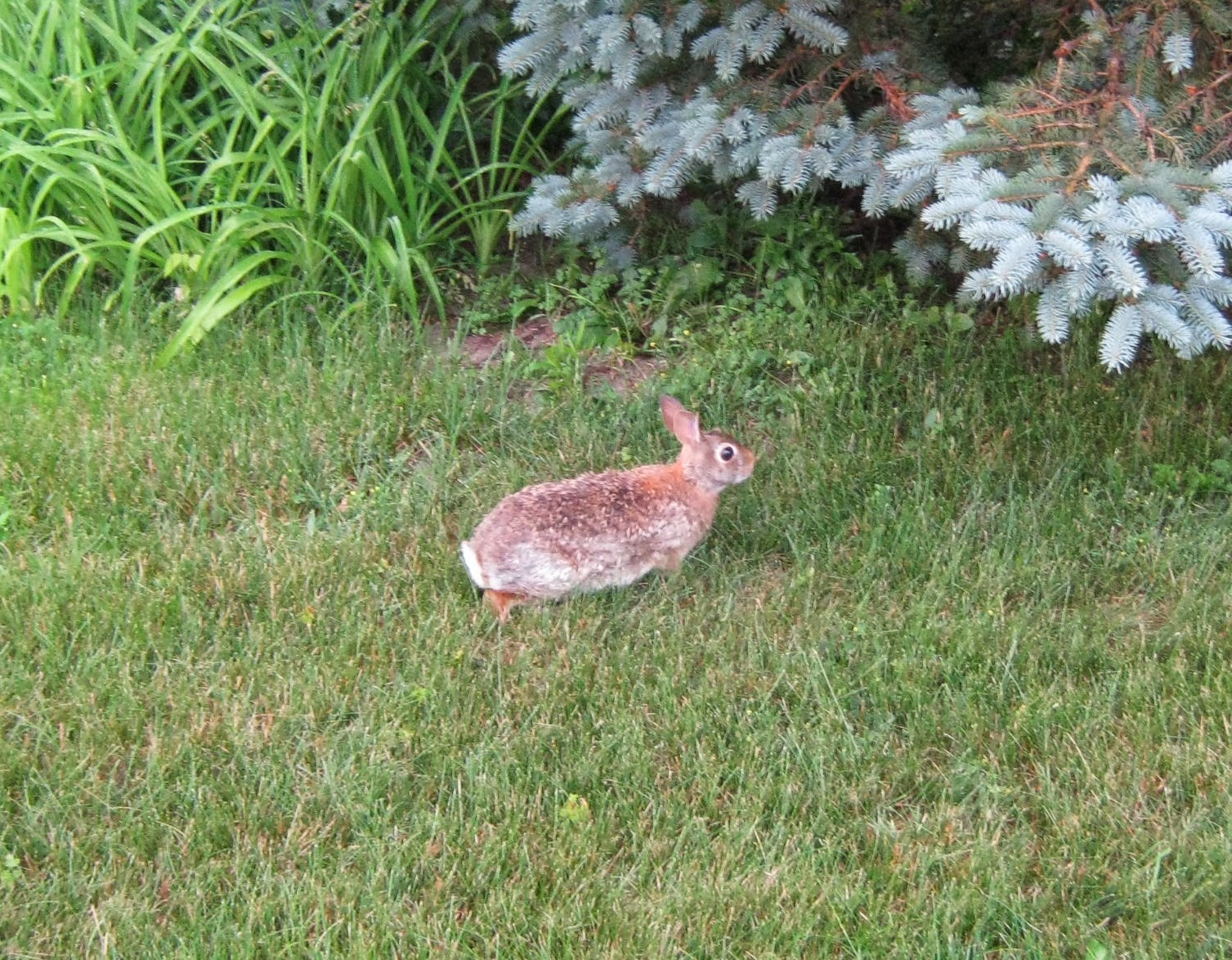 He’s pretty good at camouflage. See him to the right of the tree trunk? 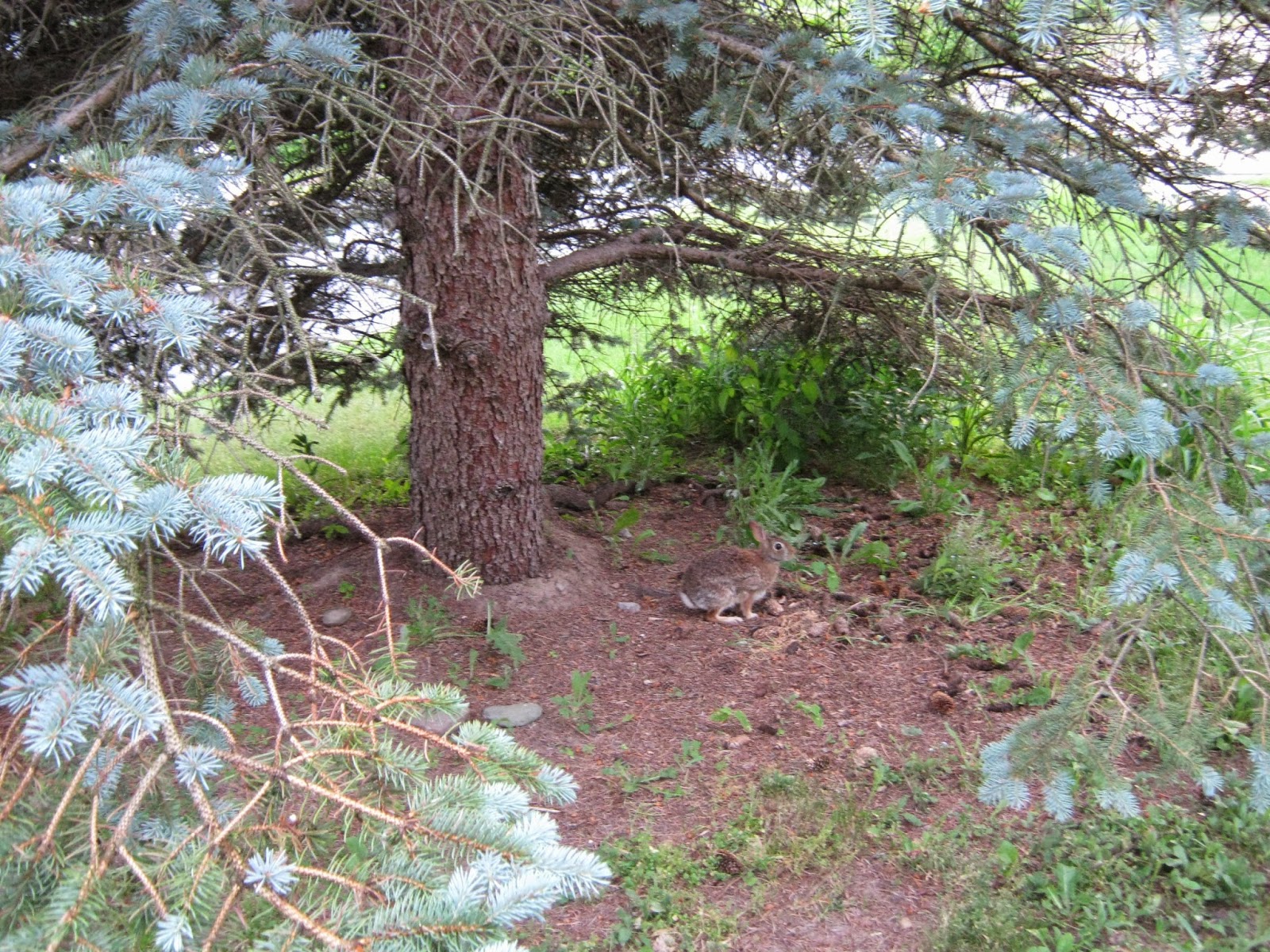 Incidentally, I’ve been going for walks early in the morning again, and I’ve spotted several more Bunnie Militia operatives around the neighborhood. It’s only a matter of time until one of them shows up in our back yard, where it’s fair game for me and my associate Joseph (Joey dog) Spaniel. There’s nothing more fun to chase than bunnies! 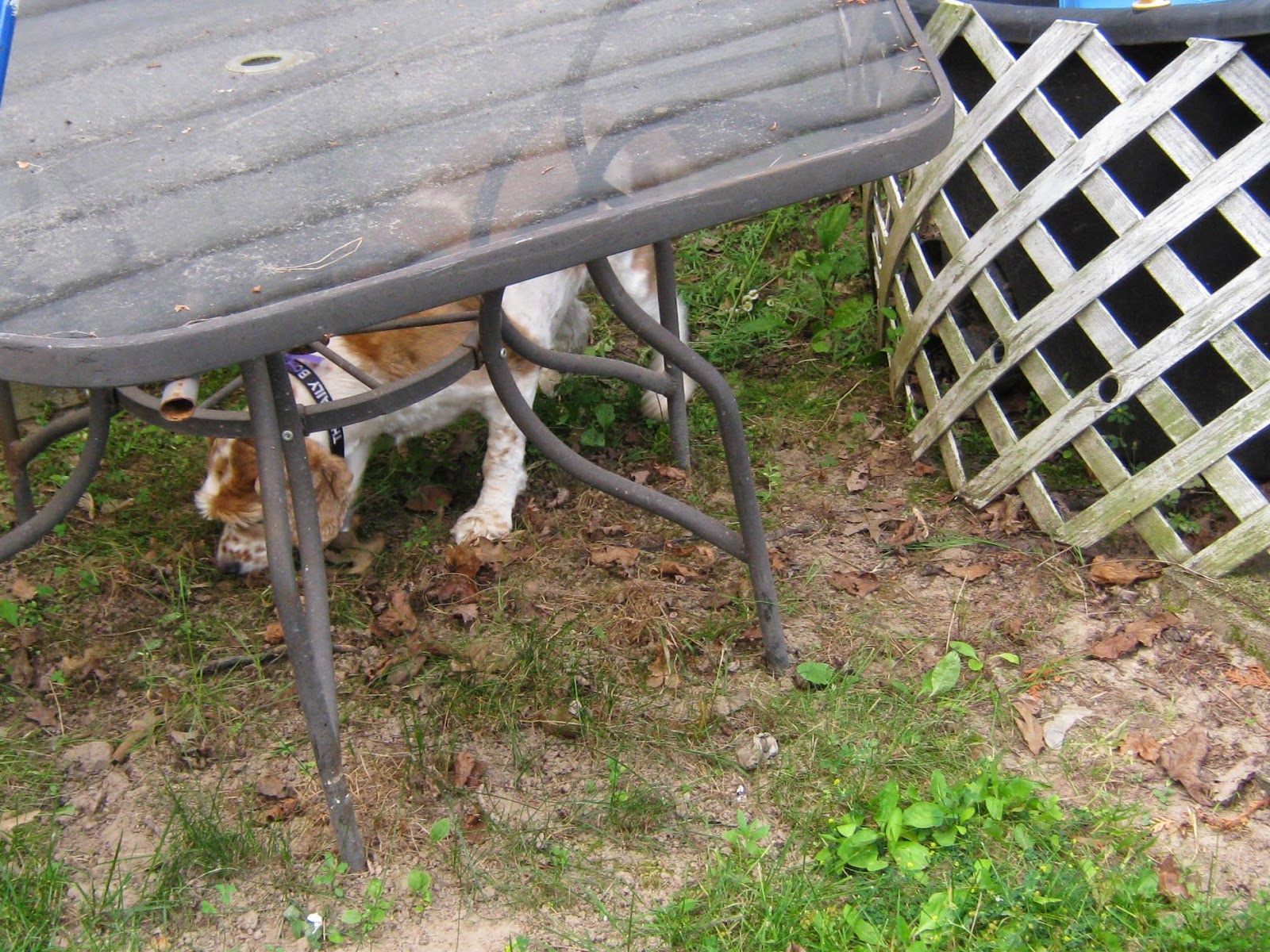 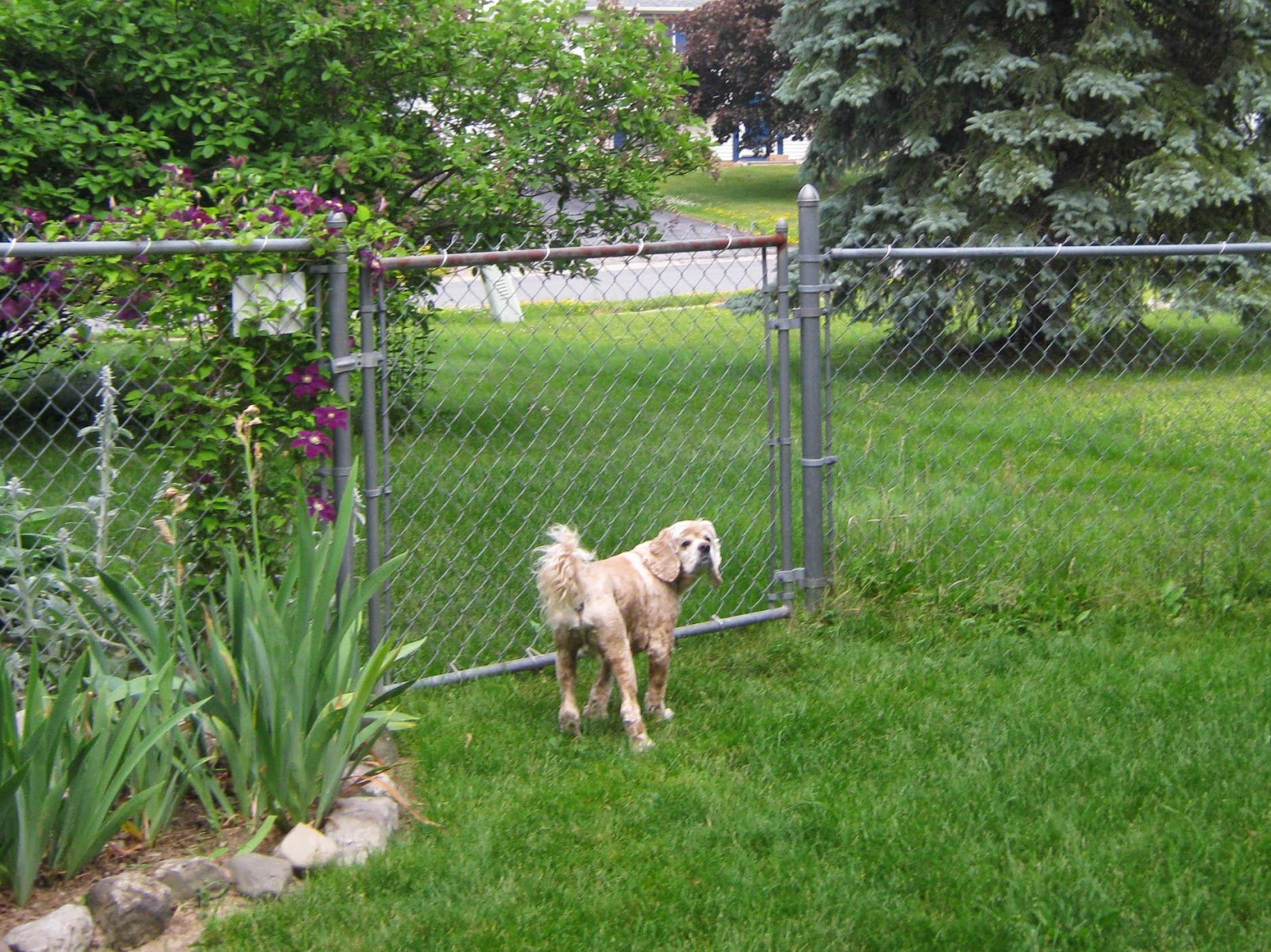 Joey dog and I have been diligently patrolling the yard. We can report that the bunnies haven’t yet broken through the perimeter. We’ve been hampered somewhat by the intermittent rainfall, though. Our humans don’t like it when we come back in all wet after rummaging under the bushes and hostas, so they don't let us out as often. But if the Bunny Militia doesn’t mind being out in the rain, then neither do we!

Today was a busy day. My ghost writer didn't have time to help me write a full article. So I'm just going to present the highlights. 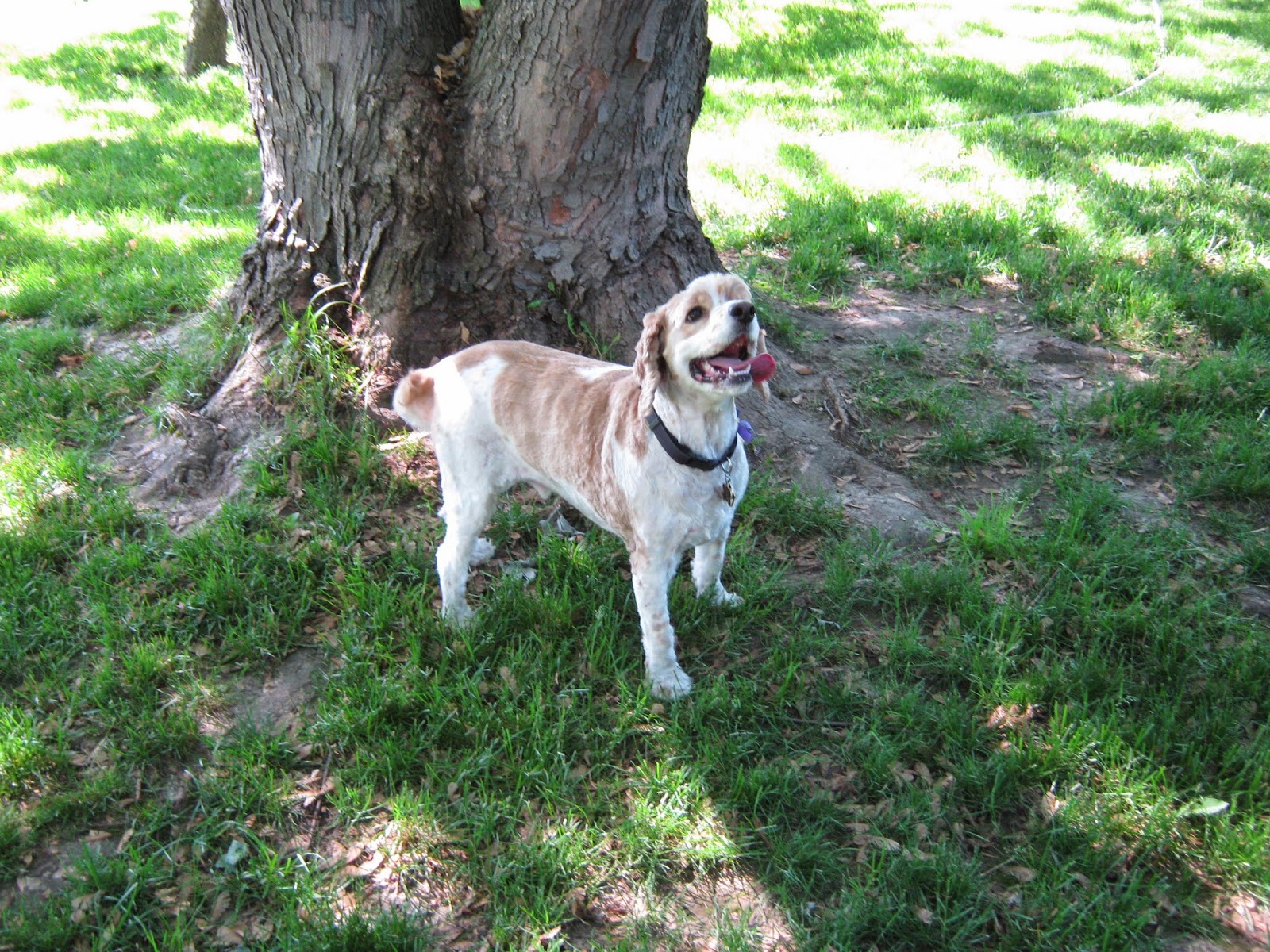 Today my human has to finish writing up a research project and won’t have a lot of time for doggie news. So I decided just to do a lightning round. Here goes:

Our Australian friend Charlie at www.charliedownunderinoz.blogspot.com posted a picture of some big white birds called corollas that he saw. Our Uncle David went to Australia on a business trip recently and sent this picture of white birds outside his hotel. Wow! 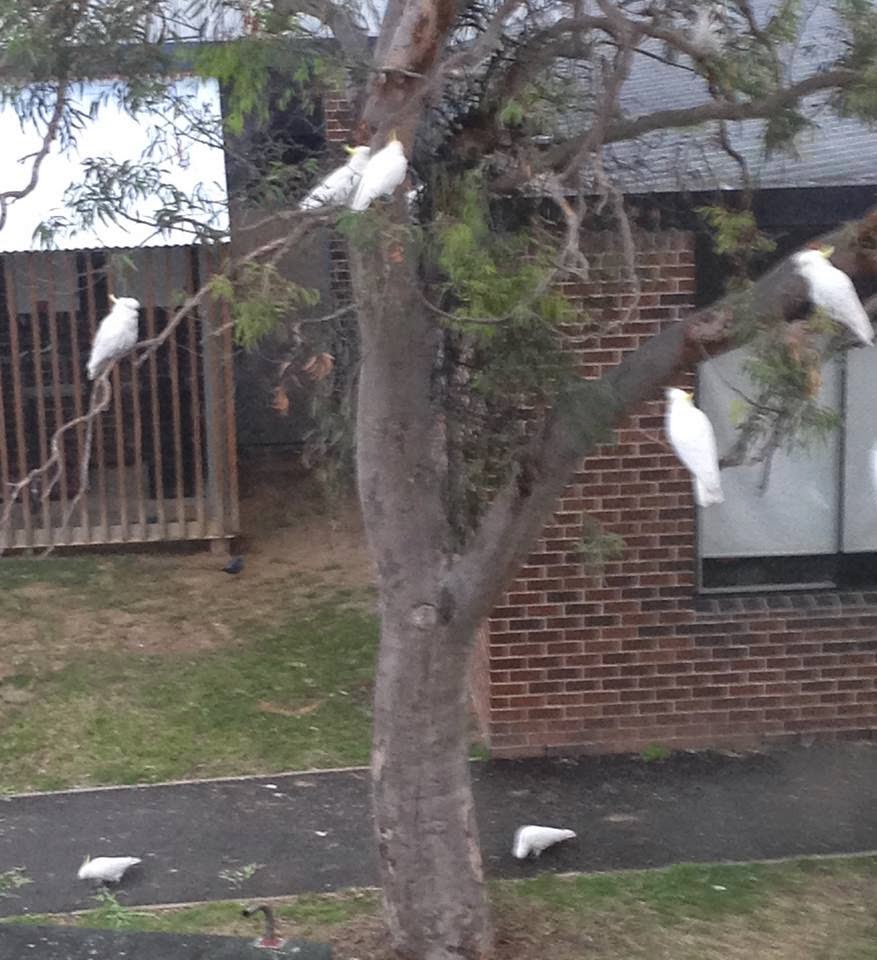 The biggest birds we have around our house are crows and grackles. Speaking of grackles, they have suddenly become very quiet and secretive now. I think they’re finally done nesting. We occasionally get one in our window feeder. Here's a not very good photo of the mayor of Grackletown himself, Honorable Effluvium Scatterstool. 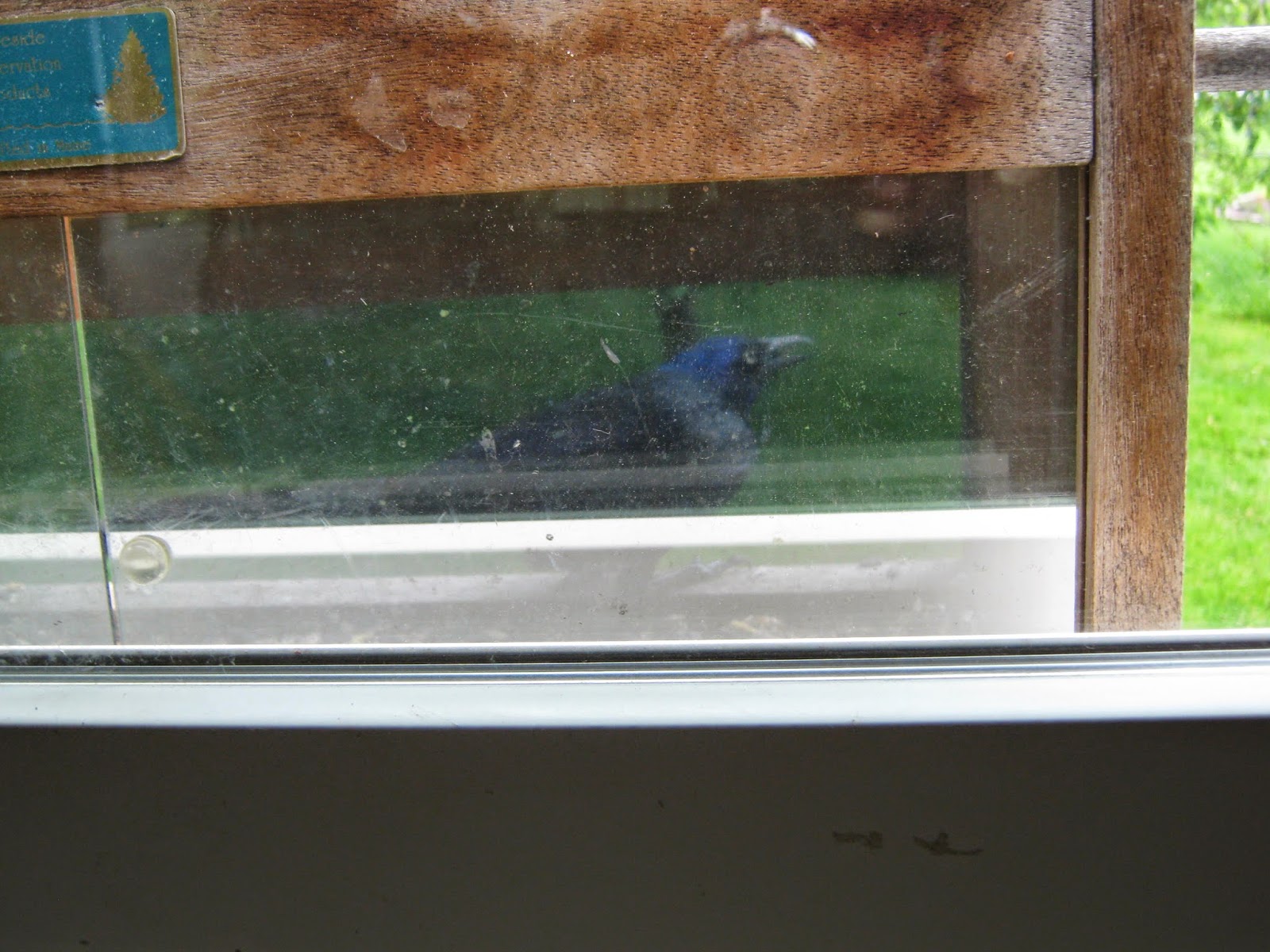 I shouldn’t say we don’t get any big birds here at all. They just don’t show up in our yard. Here’s a picture of some Canada Geese blocking traffic near a mall in Rochester recently. By the way, these geese are also known to carpet bomb entire parking lots with their droppings!

Joseph (Joey dog) Spaniel here with some good cook-out advice. Always watch closely when your humans are grilling hot dogs. Almost always, one of those delicious sausages manages to roll off the grill and onto the ground. If you have been sitting patiently, emanating the proper amount of cuteness, you will possibly get to eat that one. 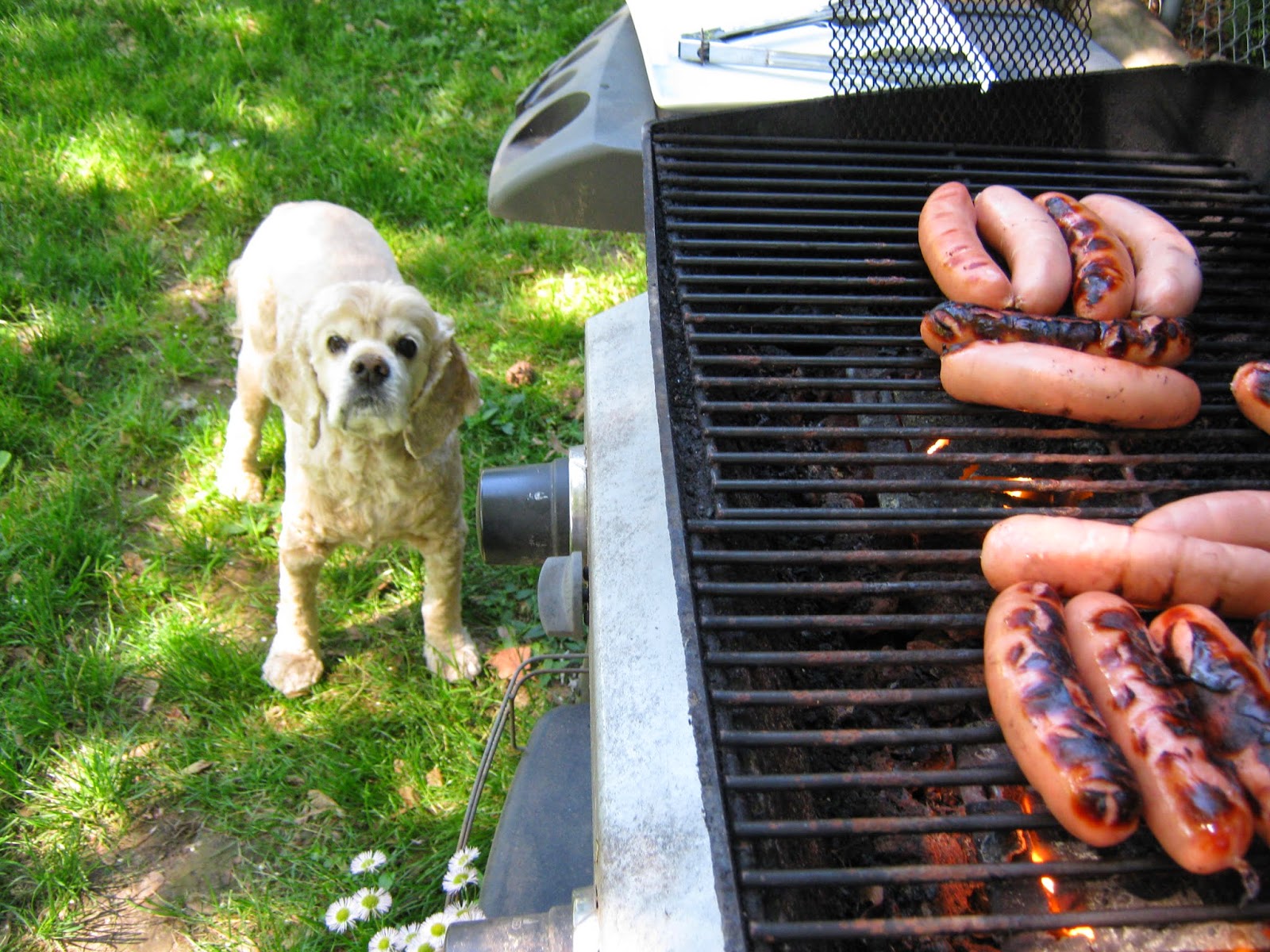 Oh, and sorry I’ve been neglecting my political commentary again lately. So here’s one: 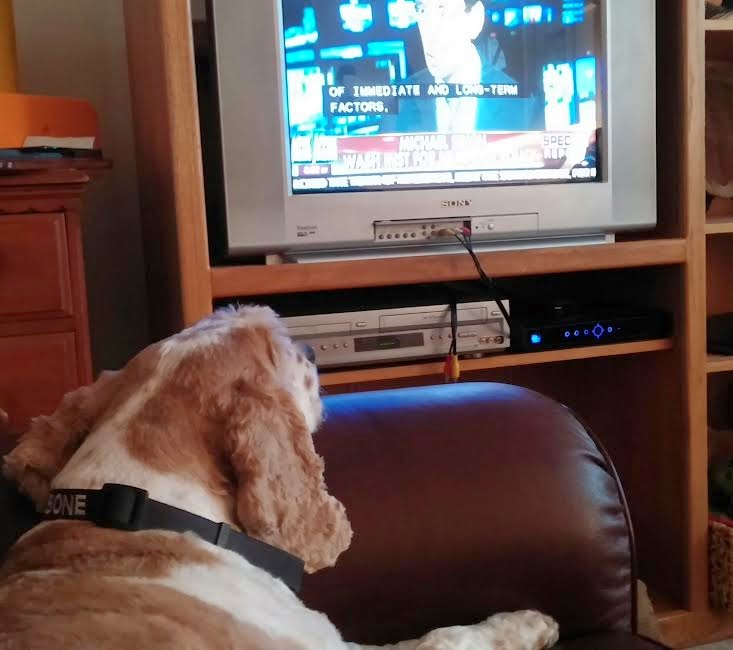 I’ve been watching the news about what is going on in Iraq. It seems I will never figure out why humans are so mean to each other. Why do humans think it’s OK to hurt and kill others just because they think differently about religion? 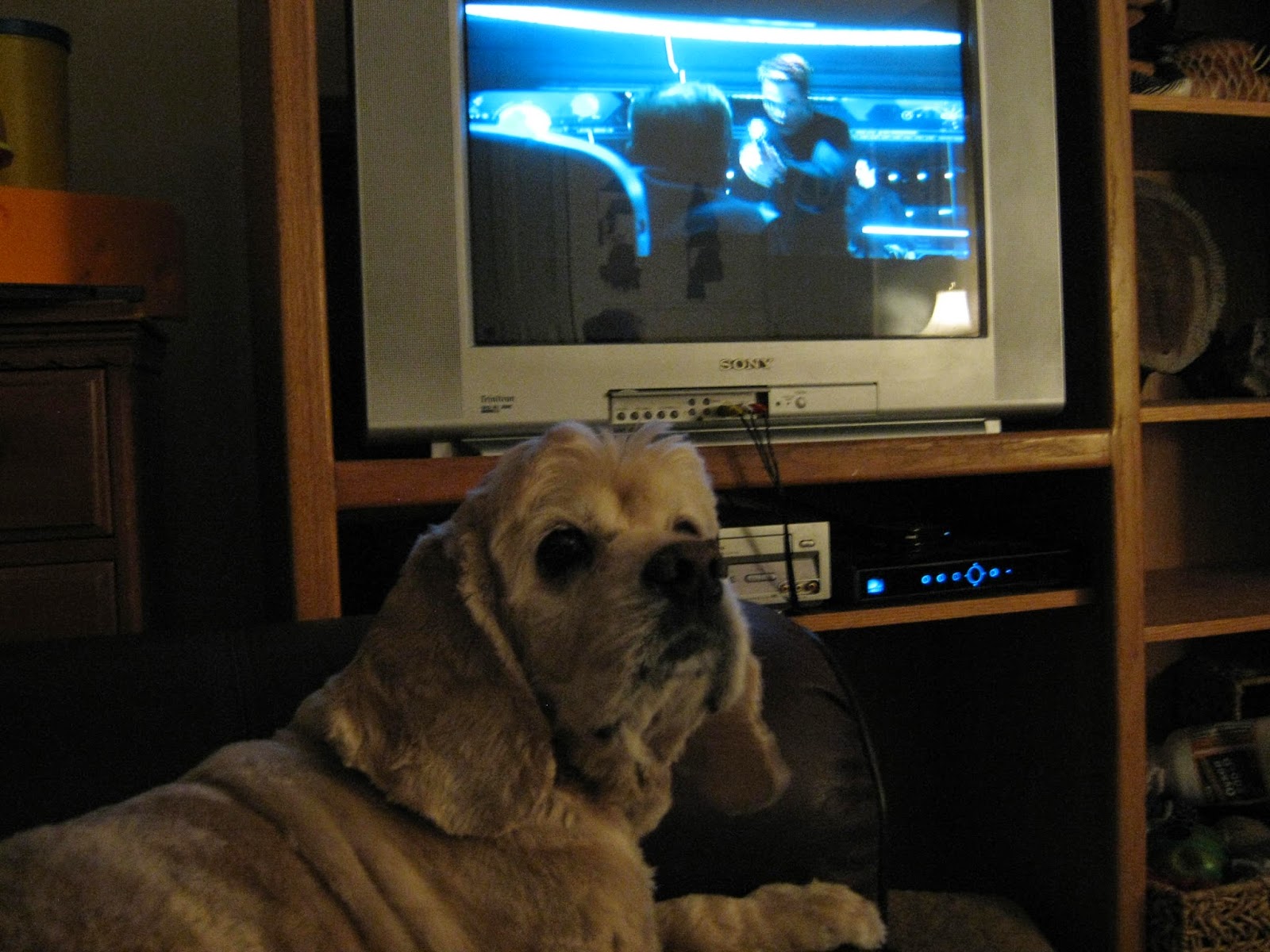 Joey dog can’t figure it out either, and pointed out that even the movie he was watching was filled with fighting and explosions. All I can say is, life is tough enough already. Think of how much better things would be if everyone just decided to get along. Rather than scheming how to blow someone else into smithereens because they have a different point of view, figure out ways to help each other instead. Just saying … 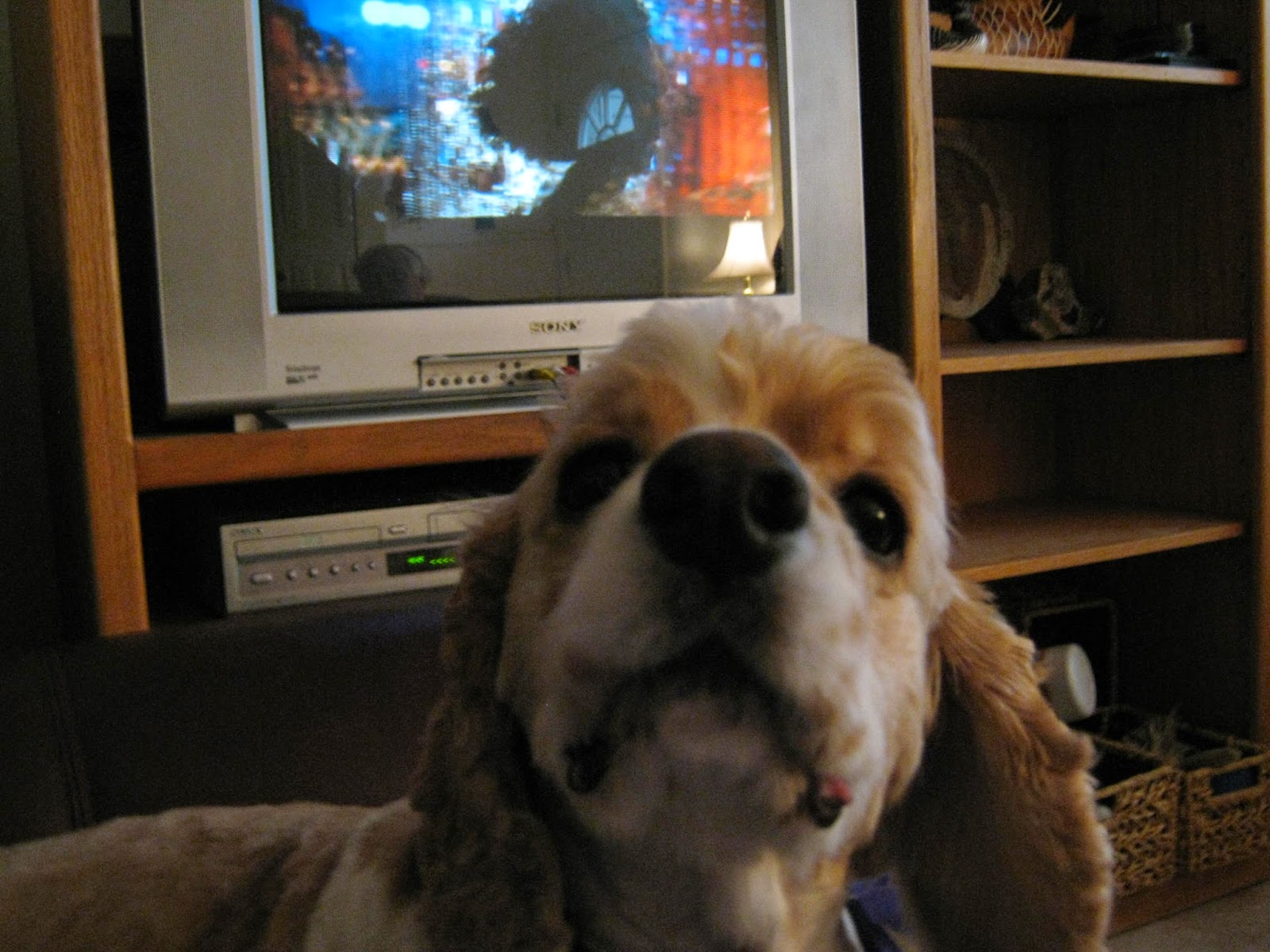