Hello there. I'm Chester L. W. Spaniel, and this is The Daily Bone. Welcome one and all, and I hope you brought your squeaky toys.

I have noticed that on the news we are being bombarded with reports of scandals. As soon as we learn about one, another one pops up. They're everywhere! I can't even decide which one I want to talk about. So instead, I thought I'd tell you about something completely different.

In late April we found a robin's nest in the bushes in front of our house. We were very lucky to be able to see it from the window and take pictures. It took only two weeks for the baby robins to hatch and grow big enough to fly away. Apparently nature is not without its own scandals. You'll notice there were three babies at first. However, in the last picture there were only two. Those two babies decided one day to sit on top of the third one and smother it. Then the mother bird threw it out of the nest. Wow. I wonder what that little birdie did to deserve this kind of treatment? 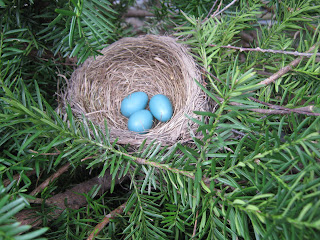 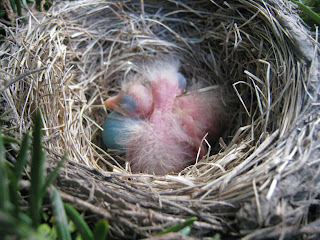 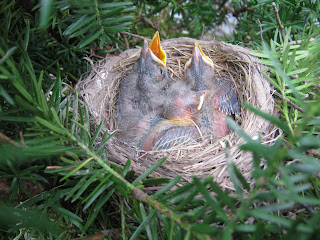 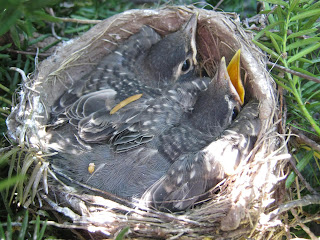 I imagine you can make this into a metaphor for any of the scandals going on in the news. But I'm just going to say it was survival of the fittest. And that's a memo.