This is The Daily Bone, and I’m your host Chester L. W. Spaniel. Welcome back.


On the news, for the last several weeks, I have been hearing about the fiscal cliff. We’re going to fall off the fiscal cliff. Oh my! As far as I know, it’s not a good idea to fall down from a high place. My humans tell me this is about taxes and spending cuts. If we go off the cliff, then our taxes go up and spending goes down.

So let me get this straight: if I have ten squeaky toys that I received for being a good doggie and doing my job faithfully every day for a year, then I have to give the government two of them. But if we go over the cliff, then after January, I’ll have to give them five squeaky toys instead of two. OK, so what does the government want with my squeaky toys? I can’t think of any answer but to fill up the hole at the bottom of the cliff. That makes sense, doesn’t it? If you fill a hole with squeaky toys, then anyone who falls in will bounce. If that’s the case, then please, take eight of my squeaky toys, and eight of everyone else’s squeaky toys and fill in that terrible hole! Hooray. It’s fun to bounce and squeak!

But the other part of this deal has to do with spending. Apparently half of the politicians want to save these squeaky toys to use to fill up the hole, and the other half wants to take the squeaky toys out of the hole and use them for something else, like filling in someone else’s holes. That would mean the hole would never get filled in and we will still get hurt if we jump off the cliff.

So, my learned colleague, Joseph (Joey dog) Spaniel and I are going to try an experiment. We’re going to see what it’s like to fall off the couch. I think if we roll towards the cushions, we’ll be OK. But if we go the other way, we might get a boo boo. What do you think? 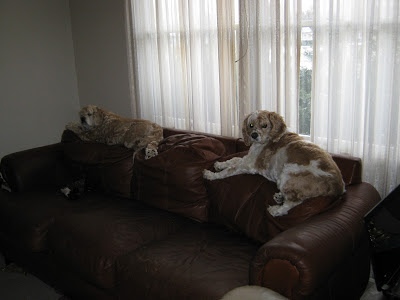