Convoluted Conundrum and Aliens Too

Greetings, and welcome to The Daily Bone. I am your watchful and humble doggie host, Chester L. W. Spaniel.


Today’s vocabulary word is “convoluted.” It means intricately folded, twisted, or coiled, or extremely complex. Apparently somebody thought it was a good idea to tie all my chewed up squeaky toys together into a convoluted mess. Oh hardie-har-har. I hope you had a good laugh at my expense. However, as I struggled to untangle this conundrum, I was struck with a bit of irony. The TV was showing a news report about the new immigration laws being voted on today. 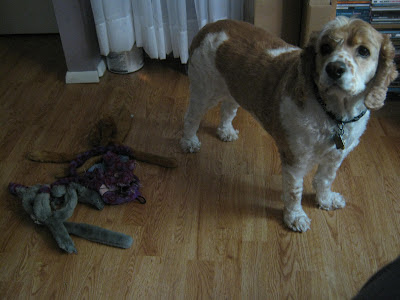 But first you’ll have to understand my opinion on immigration. I have had the experience of foreign creatures coming into my house and living here for a while. They are: Maddie Cat, Grover Bird, Frankie Bird and the two parakeets. Here they are pictured below. (The parakeets declined to be photographed.) All of these folks had the courtesy to ask permission to stay here temporarily. They were mostly polite and unassuming, except sometimes Maddie Cat hissed at me and my tolerant associate Joseph (Joey dog) Spaniel, and the birds whistled occasionally. They didn’t eat our doggie food, pretty much kept to themselves, and then they moved out. I think if they overstayed their visas, I would be OK with that. After all, Maddie Cat signed a treaty with me to help keep the house free of flying insects, and carried out this task admirably.

Squirrels are a different story altogether. Members of the evil Squirrel Cartel, their proteges, the notorious CCC (Conniving Chipmunk Consortium) plus an assortment of sneaky, nocturnal rodents collectively referred to as “Mousies,”  illegally cross the border into our yard and steal bird seeds all the time! Occasionally, lone operatives of the Bunny Militia conduct raids across our borders for unknown reasons. Joey dog had a suspicion that the rutabaga peels in the compost pile might also be subject to larceny, and therefore ate them just to be on the safe side. I’m sure our humans will soon be complaining about his gaseous emissions, but that’s beside the point. Because of our diligence, and acute sense of smell, we have recently uncovered dastardly plans by the Squirrel Cartel to steal pears from our tree. Joey dog and I have been hard pressed to keep surveillance on them all, and have spent a lot of time patrolling the yard in the summer heat to prevent them from carrying out this crime. These are illegal aliens which we would like to ban.

So, getting back to convoluted messes, I heard the reporters on the News say that the imminent Immigration Reform Bill, which at first, seemed fairly reasonable and easy to understand, was now loaded with so-called pork barrel spending. This means that in return for voting for this bill, some senators were promised federal money to fund their own little wasteful spending projects. All of this was rolled up and contorted into a conglomeration of legalese junk that topped twelve hundred pages, and no one had the patience to read it all. Why can’t we pass laws that are simple? If it were up to me, I’d say the Government shall not pass any more of these complicated bills until I sort out my knotted squeaky toys. I can assure you that I most definitely am going to sleep on that for a long time too.