Hello lucid readers. This is The Daily Bone and I’m your sane doggie host Joseph (Joey dog) Spaniel. Unfortunately Chester L. W. Spaniel has temporarily lost possession of his faculties, and has been excused from writing The Daily Bone today. 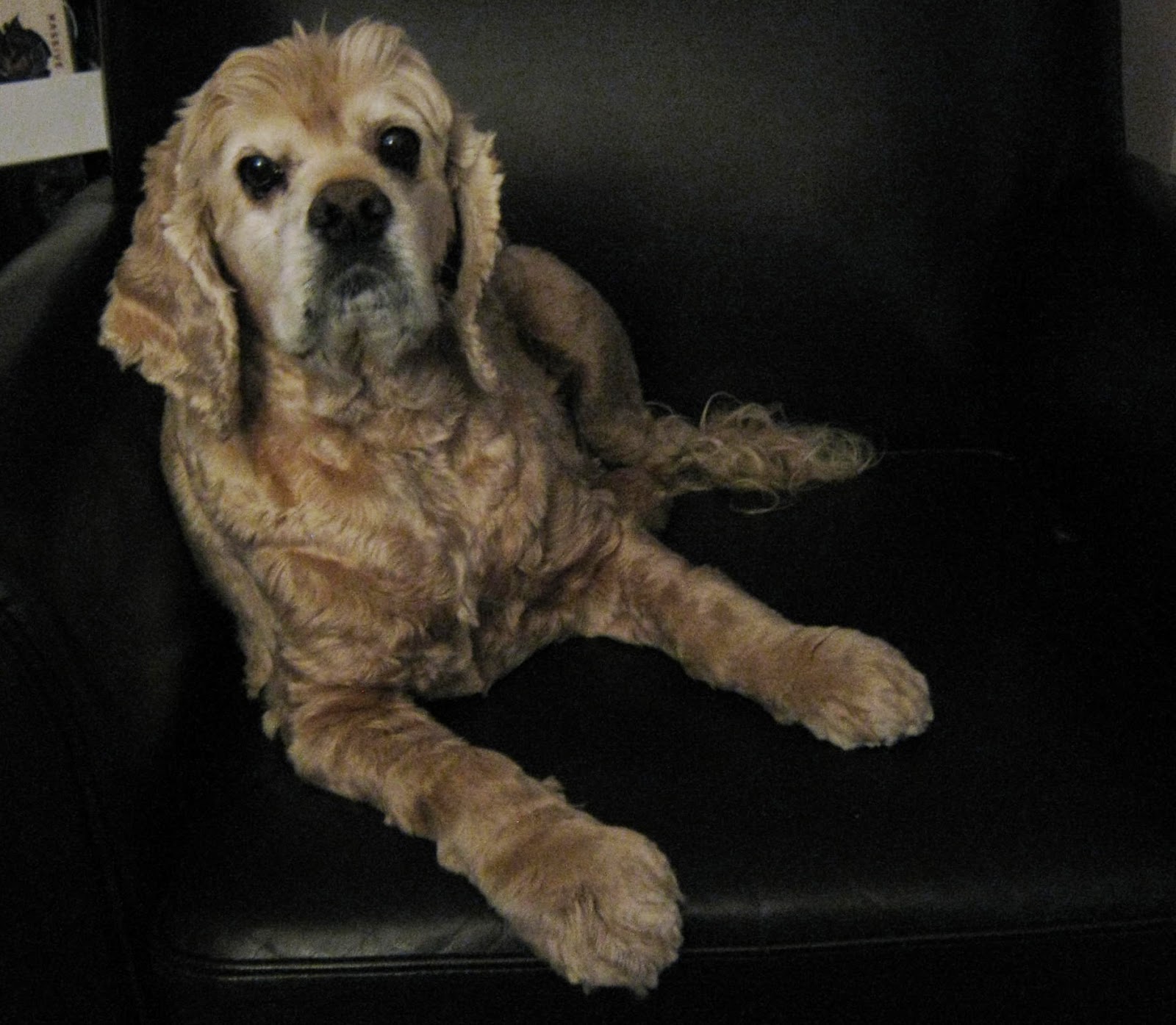 As all of our faithful readers know, Chester is crazy about squeaky toys. But today I think he's gone a bit too far. He was observed barking at his squeaky toy storage facility. Yes, you heard me right. Chester was standing in front of the basket, barking and barking. 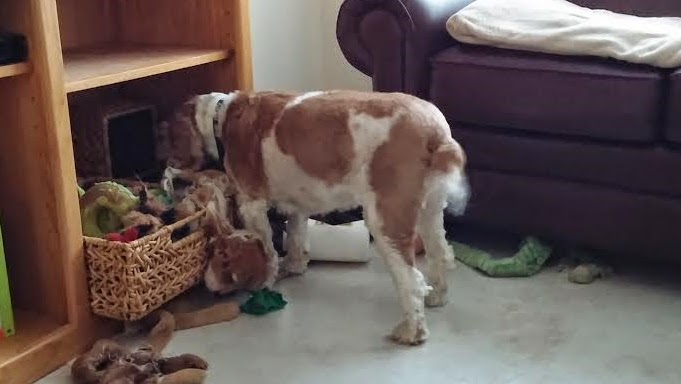 I could discern no practical reason for his freaky behavior, so I concluded he must have finally gone over the proverbial edge. But this isn’t the first time I’ve observed him acting irrationally about inedible objects. 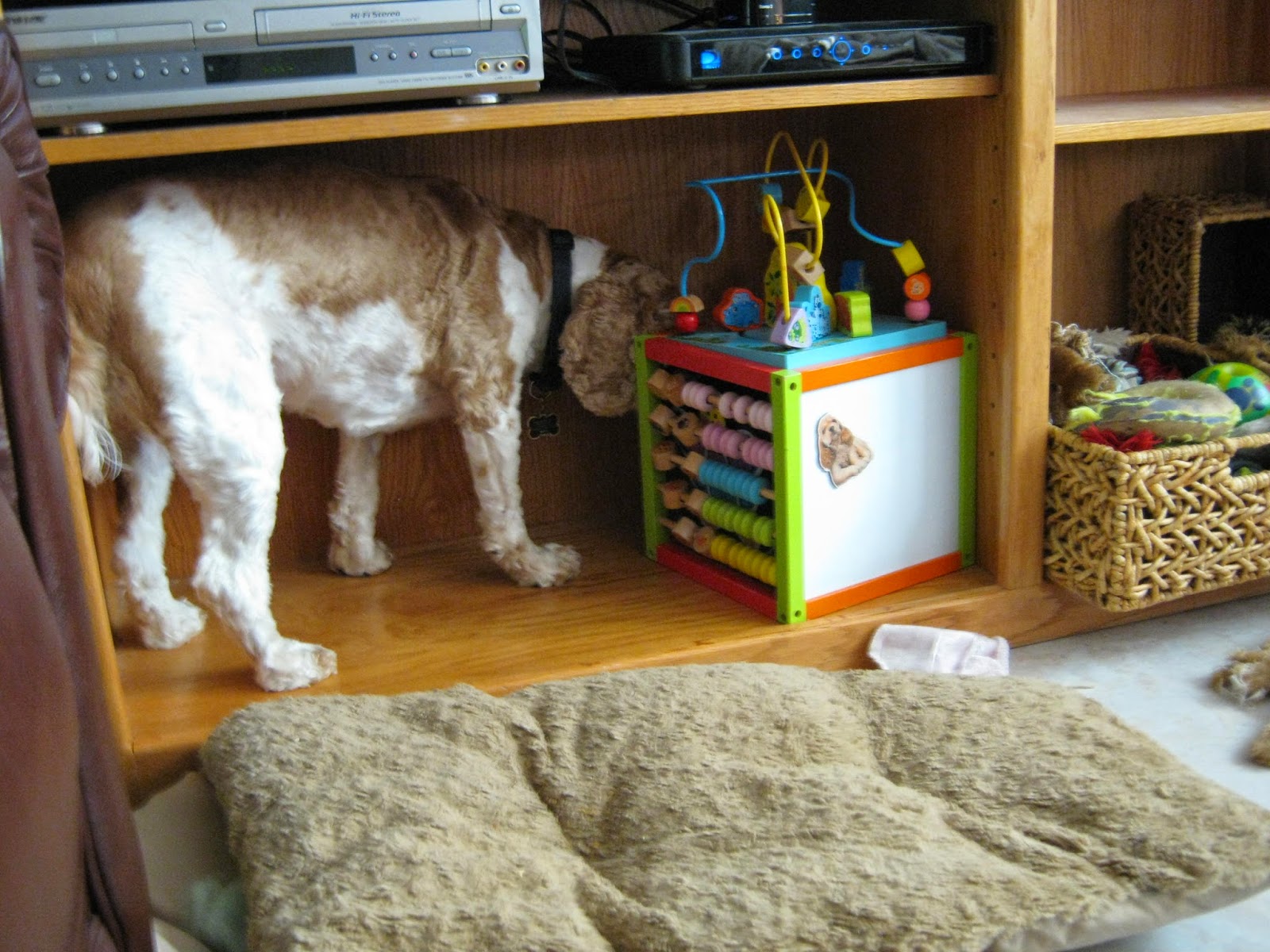 On June 30, 2014 he discovered one of Ryan’s high tech baby toys had been placed on the bottom shelf of the TV stand. He pushed the doggie bed out of it’s designated spot so that he could look behind the toy. 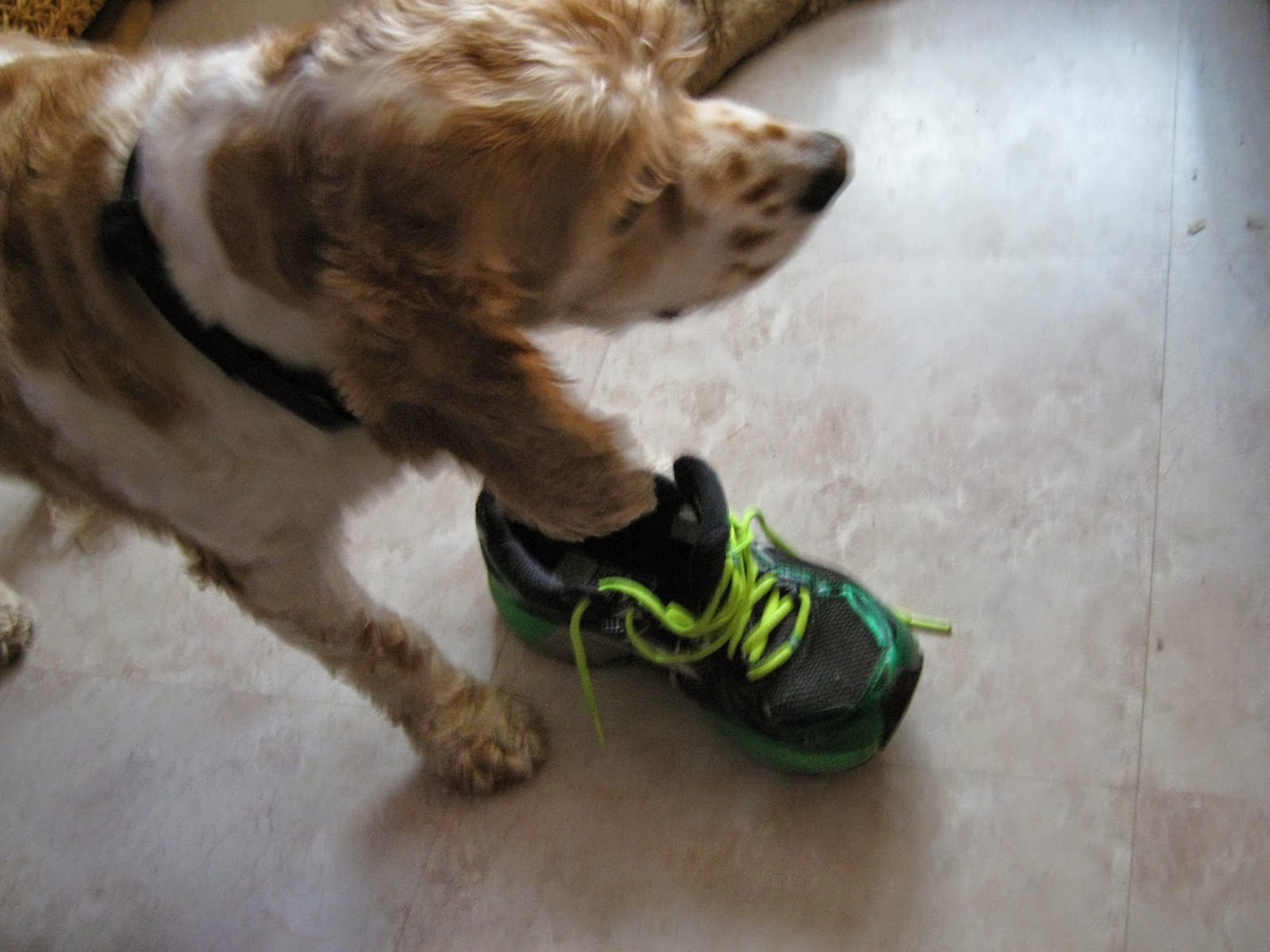 On July 8, 2014, he stole a shoe! Now that is some serious puppy behavior. A well-trained, mature, and dignified doggie would never steal a shoe, unless he wants to appear on www.shameddog.com 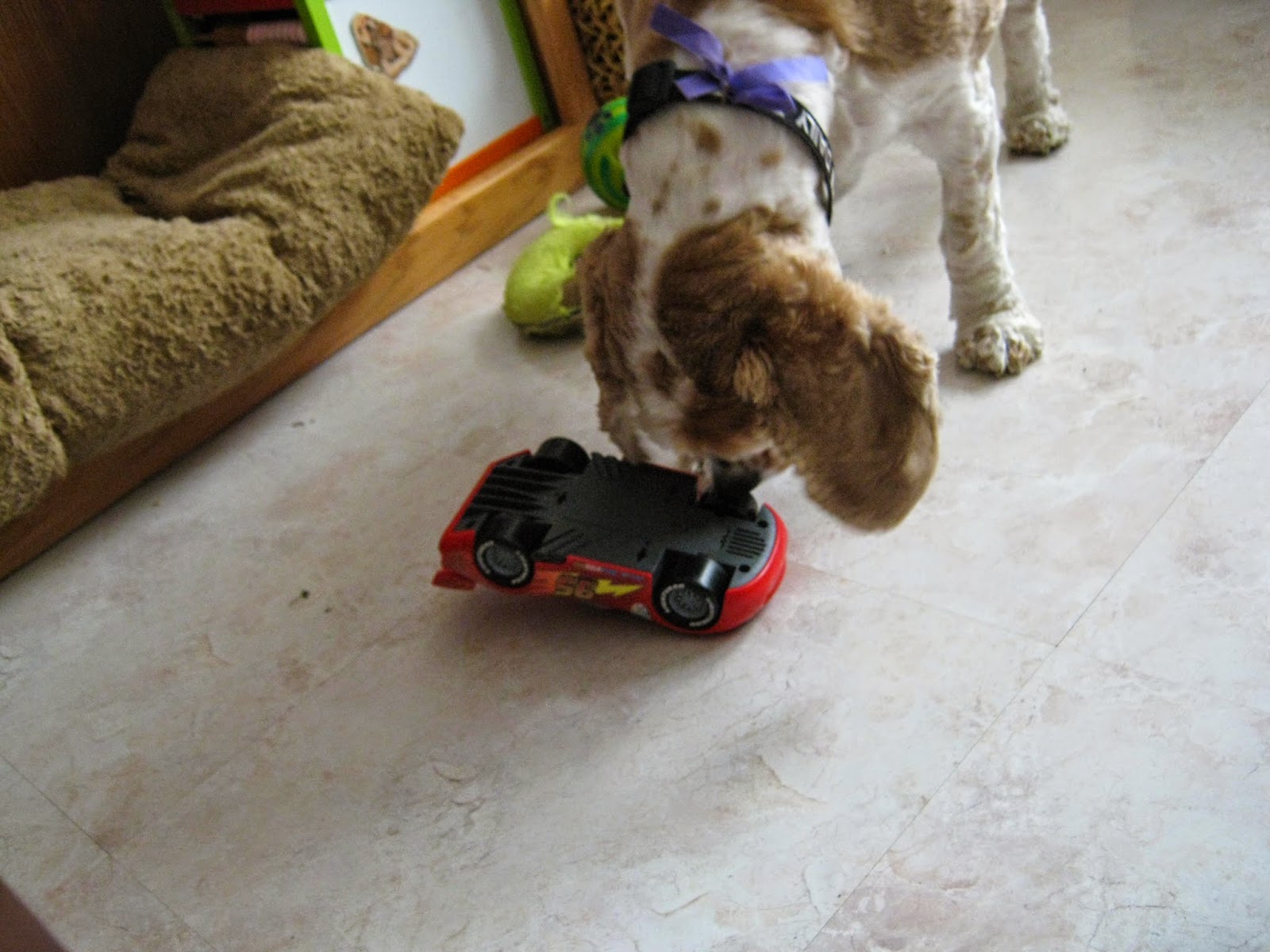 On June 23, 2014, he committed a felony: Grand Theft Auto! Well, the car did seem to be abandoned. Dad found it under the ottoman.

Although I don’t have any photographic evidence, I know for a fact that Chester also likes to slobber tennis balls and then roll on them. For some reason he also loves to remove the stuffing and squeaker from any and all new toys, whether they’re his or not, and make a huge mess. Sometimes he even eats shreds of his squeaky toys. There is a medical term for that: pica. As senior doggie in this house, I can only conclude that Chester has some major psychological flaw. I mean, who would want to stand around barking at squeaky toys when there is pizza to watch? 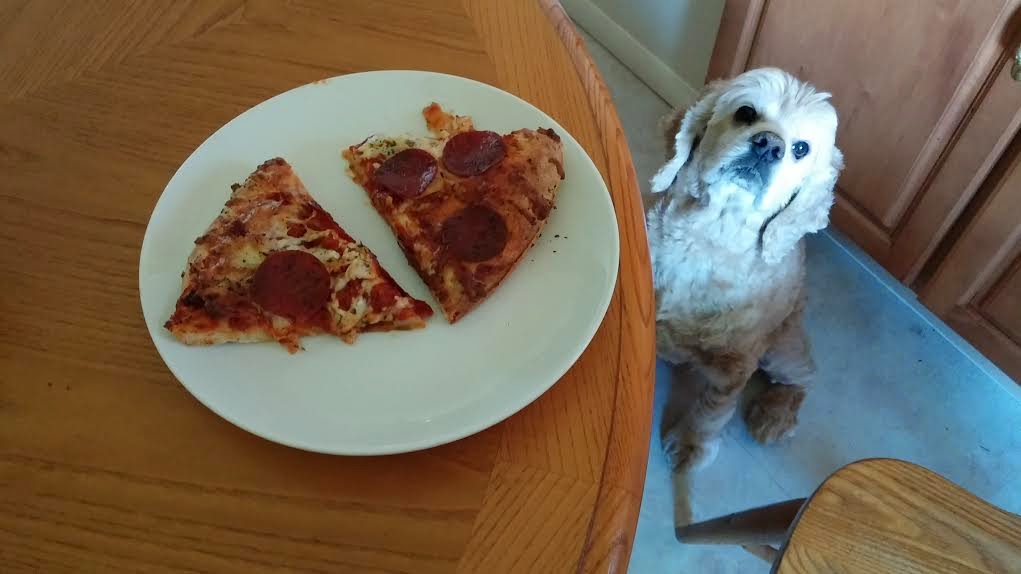 We interrupt this diatribe for an important doggie news bulletin. This is your watchful doggie reporter Chester L. W. Spaniel. (By the way, reports of my derangement have been greatly exaggerated! Nice try Joey dog, but I suggest you stick with the food channel.) Evidence of covert squirrel activity has appeared in our back yard this morning. We found fresh maple fronds scattered on the ground that reeked of squirrel spit. 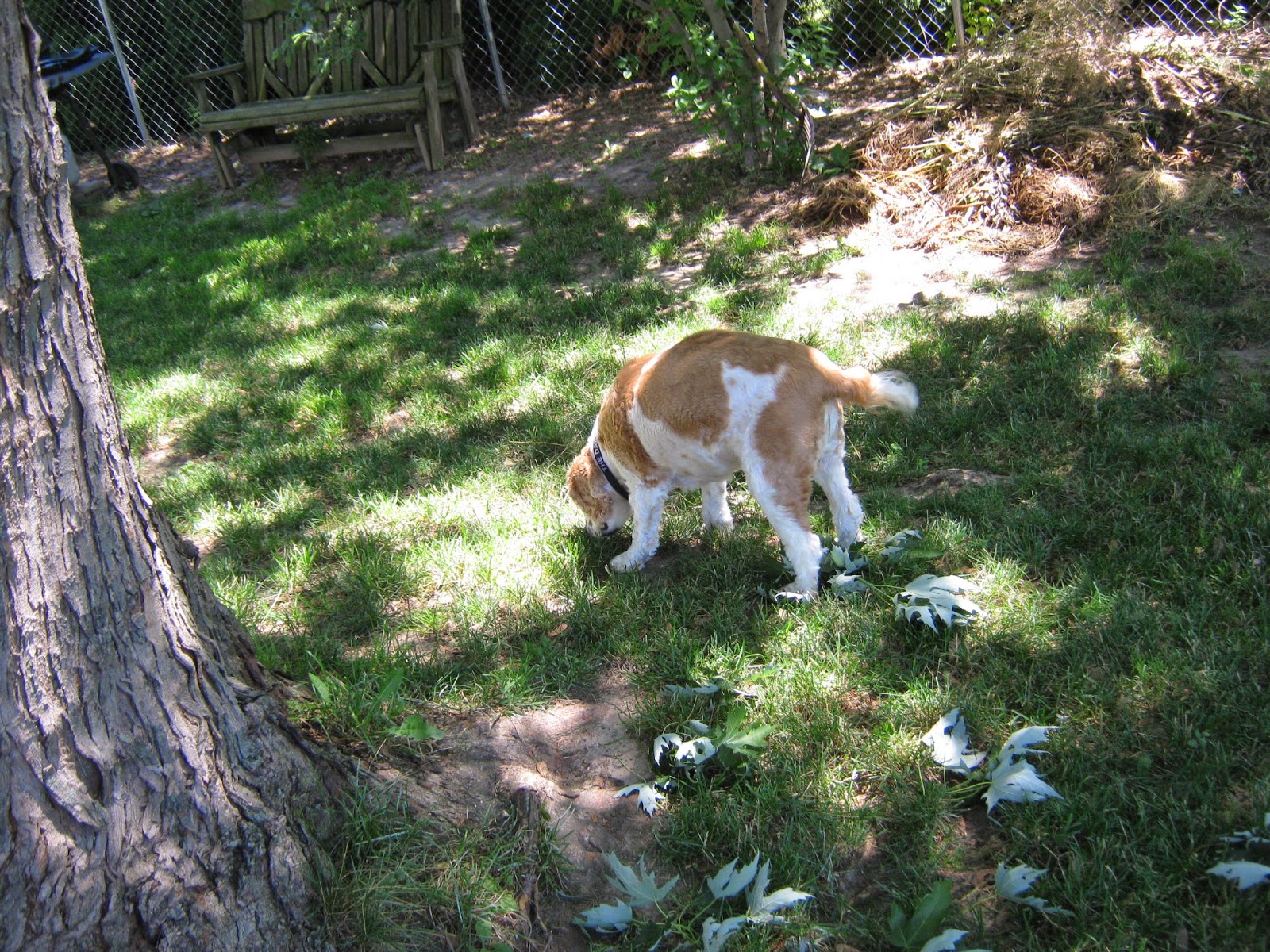 Upon looking up, we were clearly able to see that construction has resumed on the previously abandoned squirrel tenement up in the silver maple tree. We have no idea where the squirrels got their funding for this new project, but we can only speculate the Evil Squirrel Cartel was involved. Perhaps there was some illegal seed smuggling deals, a nut-laundering scheme, or else a neighbor somewhere in the vicinity has put up a new bird feeder. 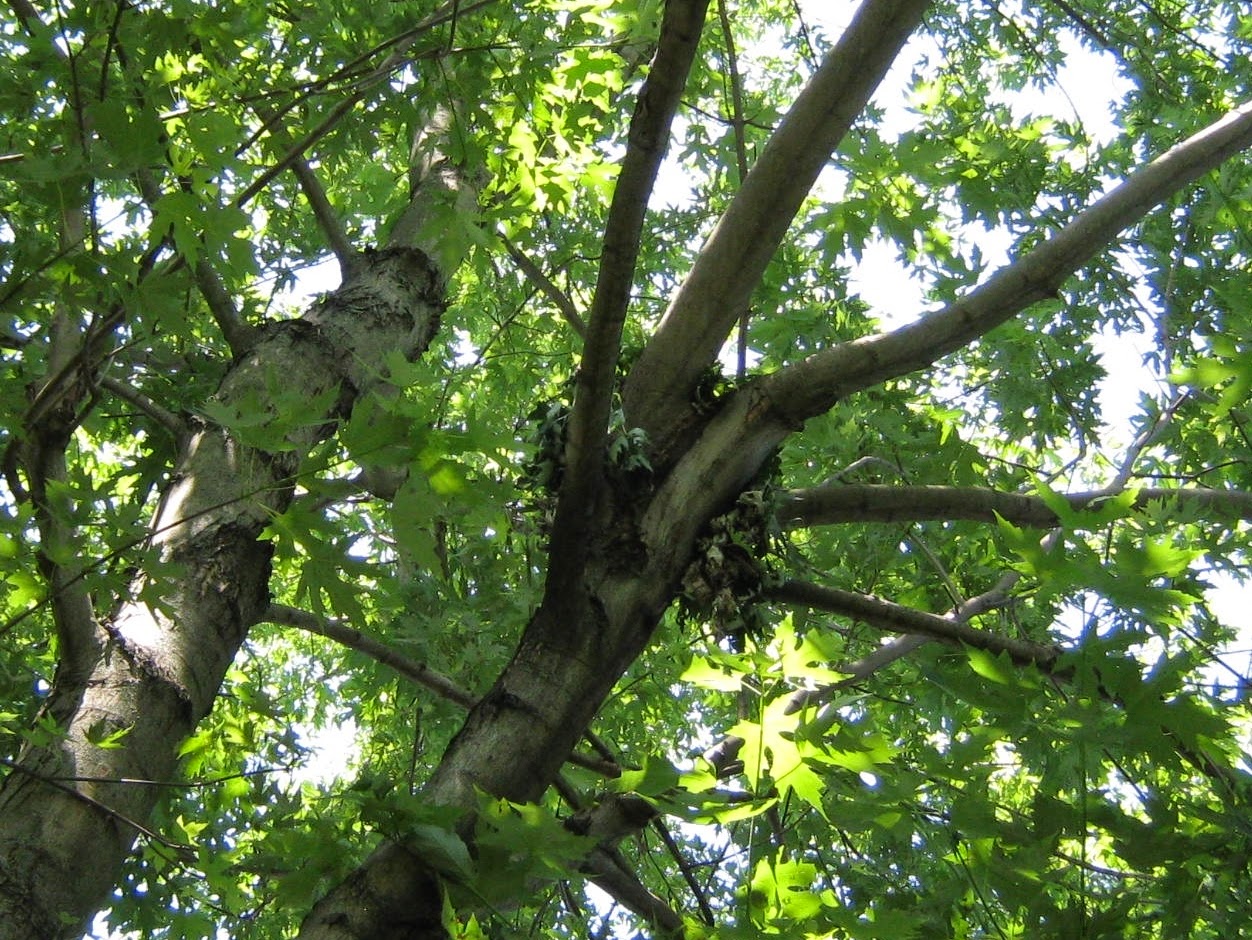 I can assure you that we will be keeping a close eye on the silver maple tree today. We heard our humans discussing plans to employ the water cannon to forcibly evict these miscreant squatters. The presence of such a structure induces the tree to rot. If there is a heavy snow fall, high winds, or an ice storm, the branch can then break and fall on something or somebody; and we can't have that happening. And now, back to Joey dog … 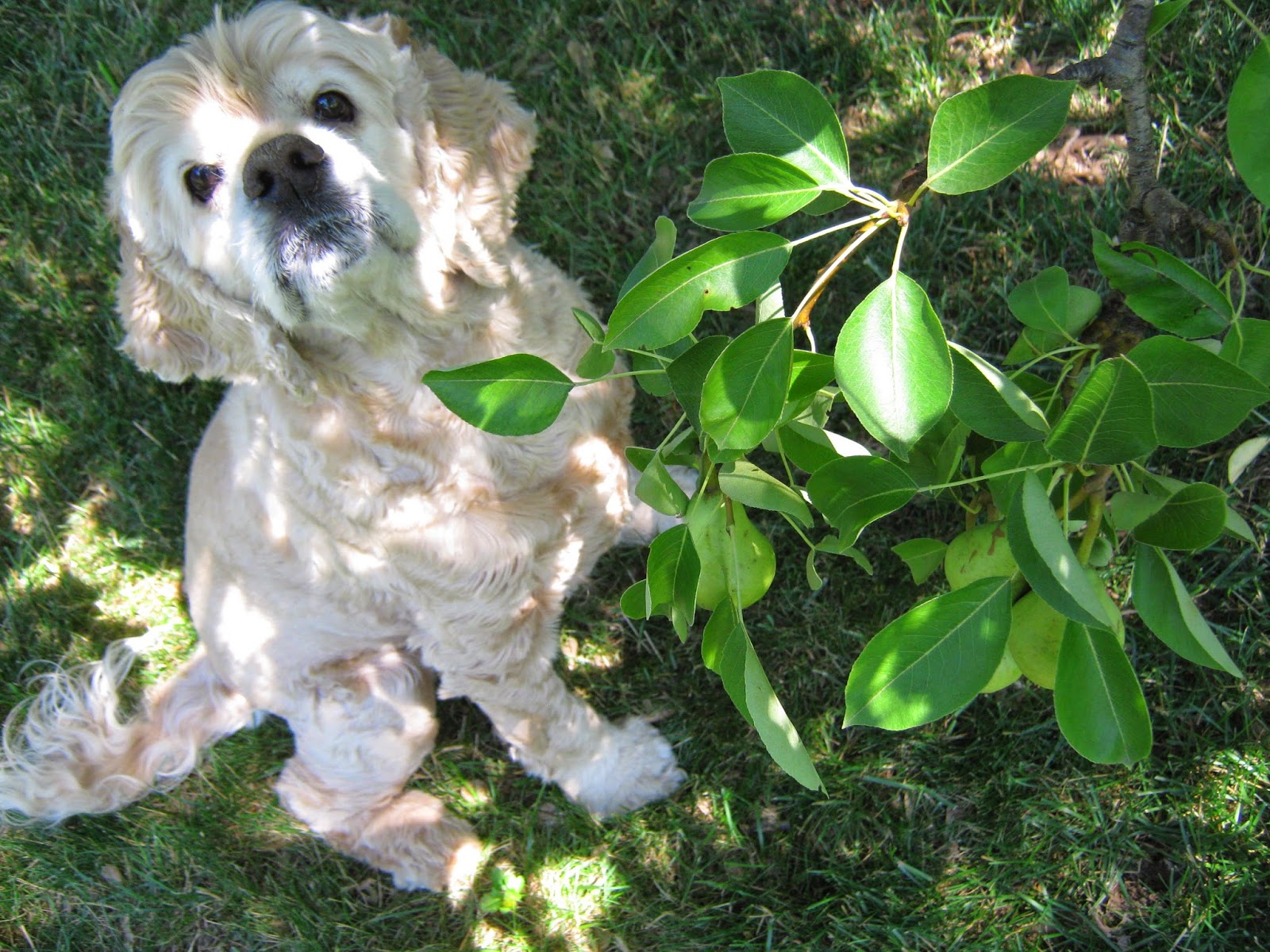 Thank you Chester. All joking aside, I think the threat of squirrels setting up headquarters in our back yard is something we doggies can both agree on. We're certain their modus operandi is ultimately to steal the precious few pears that are growing this summer. Therefore I will stand guard by the pear tree, while Chester barks up the maple tree. We will keep you updated on any new developments.