Hello everybody. This is The Daily Bone and I'm your peerless doggie reporter Special Agent Chester L. W. Spaniel. 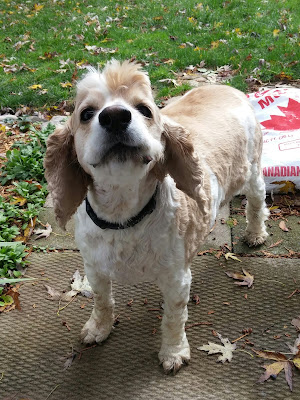 Last night there was thunder and lightning and heavy rain almost all night! This morning the entire back yard was like a soaking wet sponge covered with leaves. 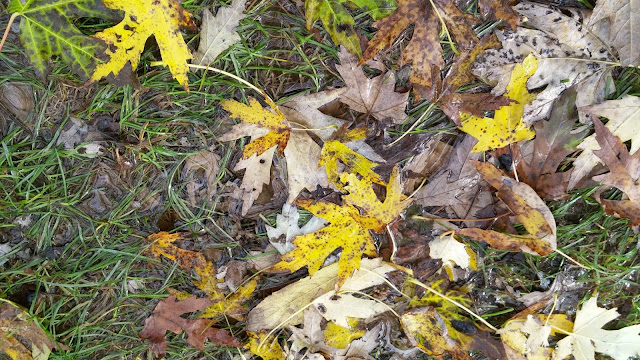 We finally saw the sun, though! 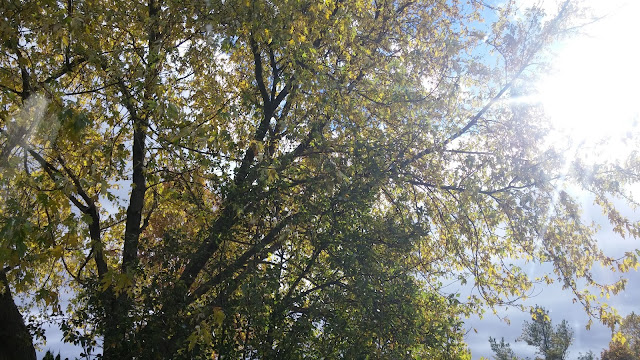 In the late morning ghostwriter spotted a single solitary squirrel hanging around in the big pile of sticks by the back fence. The squirrel was acting kind of weird and more ditzy than usual. She also noticed a whole flock of sparrows hopping around in the stick pile hassling the squirrel. Well, you know sparrows are tough little spit-fires at times. Of course I was happy to go out and do a thorough inspection of the area. 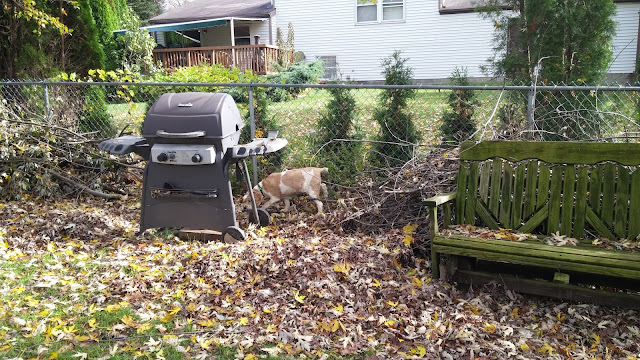 The sparrows and the squirrel fled the premises as soon as I arrived. 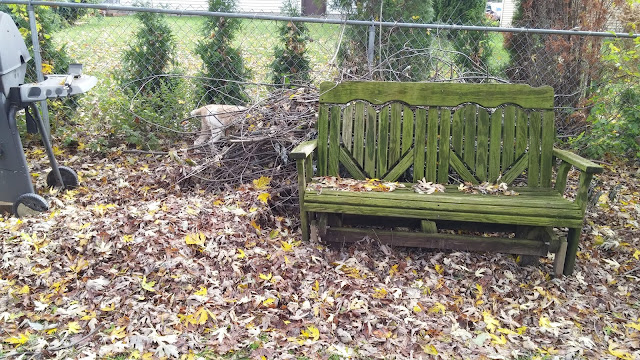 But I can smell their footy prints! 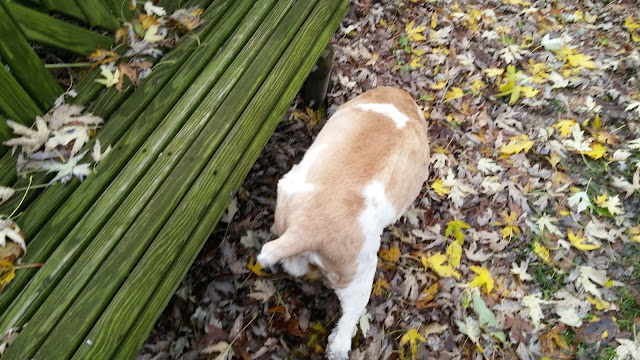 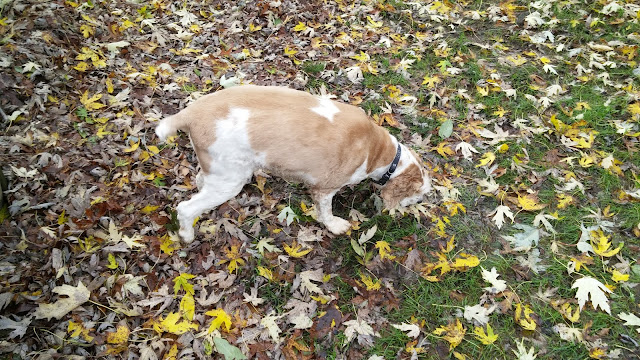 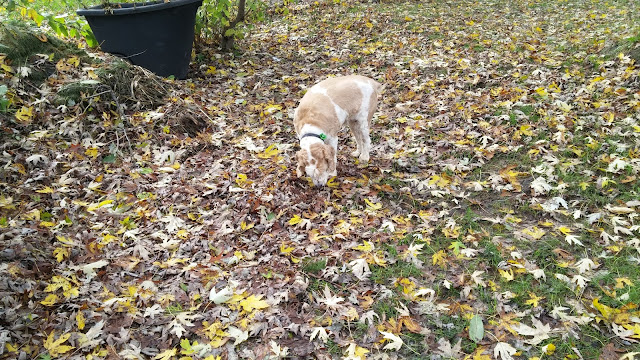 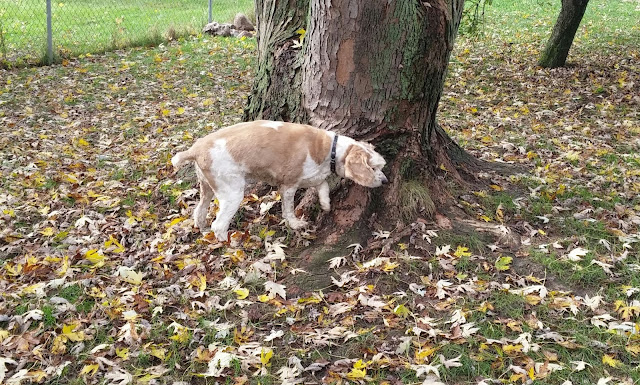 Ah, a cocker spaniel in his element tracking birdies and varmints in the leaves and bracken. 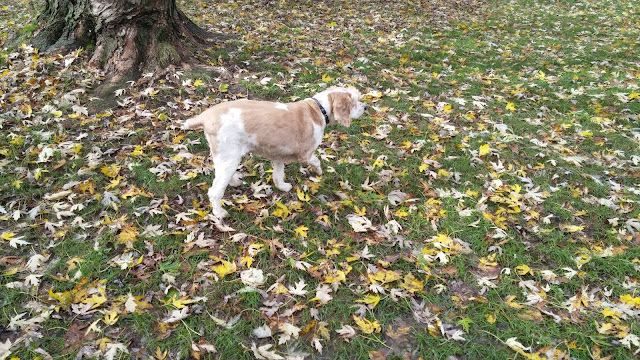 I do believe I've come to a conclusion to the case of the weirdo squirrel and belligerent birdies. 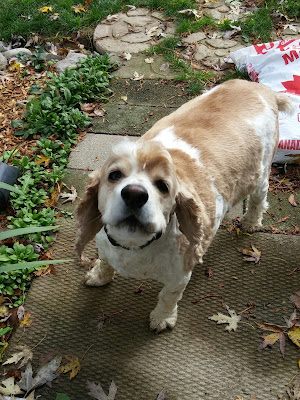 
1. As you can see in photos number 4 and 5 above, behind the gas grill, the tall arbor vitae bushes have been replaced by smaller ones. (Last summer some of them died from the drought from the year before, and the neighbor dug them up and planted new ones.) Those tall ones used to be headquarters for Sparrows Incorporated, and they contained high rise luxury sparrow apartments, and a sparrow kick-boxing arena.

2. In front of the small bushes and the fence, and behind the old wooden glider, there is a dense pile of sticks which ghostwriter and Dad had collected from the yard over the last couple months of violent weather. Sparrows Incorporated had claimed this pile as their temporary office until the small bushes get bigger.

3. As loyal readers will know, Dad recently obtained a new, long range branch clipping tool, and used it to remove the Evil Squirrel Cartel's Central Command Station from the silver maple tree. I'm pretty sure that ditzy squirrel was checking out the stick pile as an alternate real estate option for his winter hide-out, much to the consternation of Sparrows Inc.

4. But every time the squirrel tried to leave the stick pile, he would step onto the very soggy leaf covered ground. Fearing he would sink to the bottom of an endless abyss, he'd jump back to the stick pile where the sparrows would resume their harassment campaign. 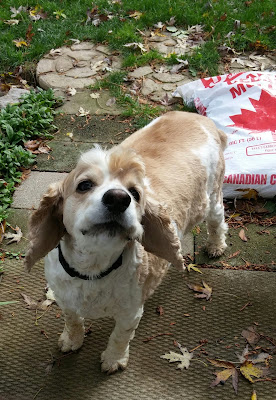 I'm pleased to say the Double Doggie (minus one) Homeland Security System, featuring your diligent doggie detective has solved another mystery! There was obviously a serious real estate squabble going on. I will be sure to keep a close eye on the Evil Squirrel Cartel and make sure they don't bother Sparrows Inc. again.

As a reward for my excellent detective skills, ghostwriter and Dad gave me something very special. You see they tried a delicious new item for dinner: braised lamb shank, with mashed potatoes, savory gravy, and salad. 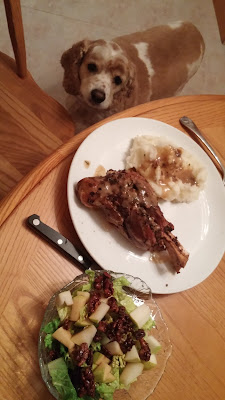 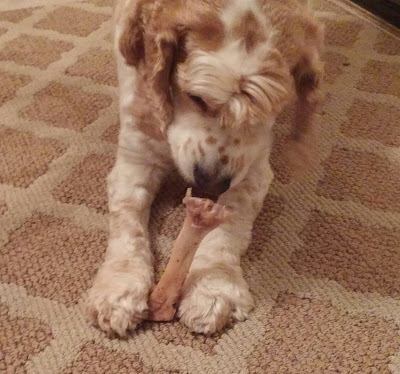