Hello again. This is a TDB Special Report. I'm your diligent doggie commentator Chester L. W. Spaniel with an update on the missing squirrel saga. 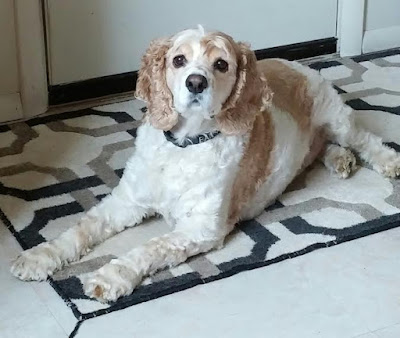 I saw a squirrel today! It was alias Twinkletoes (or as I call him: Ratface.) He was looking pretty humble after narrowly escaping that big hawk the other day. He made no demands for those peanut butter sandwiches he thinks I owe him. 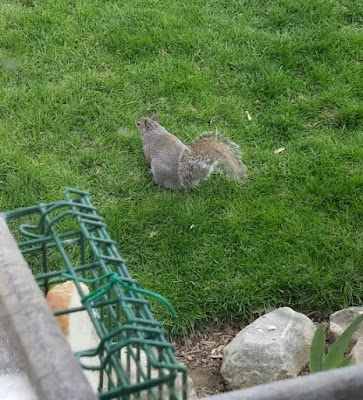 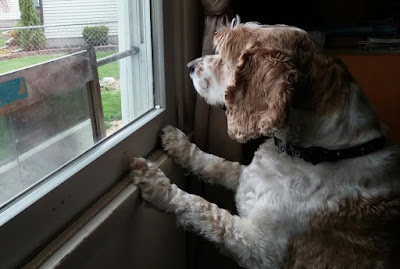 So he wandered over to the hanging birdie feeder to pick up the seeds the little birdies dropped on the ground. Loyal readers will remember that the grackles think those fallen seeds are for them exclusively. Soon the big grackle boss birdie, the honorable Effluvium Scatterstool, President of the Great Grackle Flying PTA (Poop Tossers Association) arrived. At first Twinkletoes ignored him. Then, Twinkletoes turned and started trash talking Scatterstool. The President of the Great Grackle Flying PTA was in no mood for this and lunged at him! 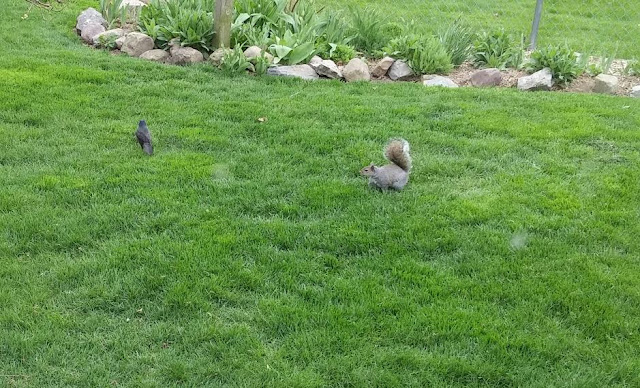 Twinkletoes thought he could just scurry and hide behind the pear tree. 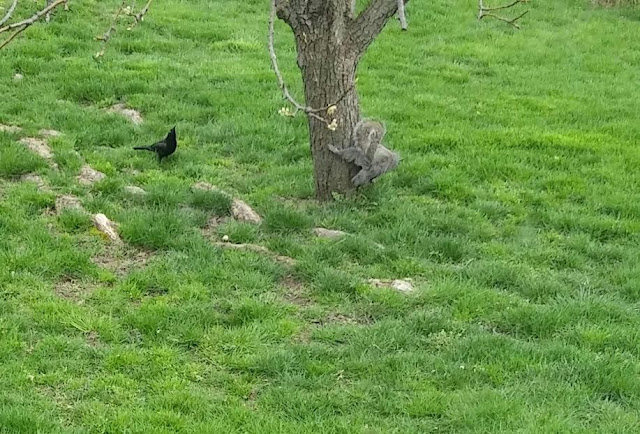 Look carefully at this picture below. That black blur is Scatterstool dive bombing Twinkletoes, who's now running as fast as he can toward the silver maple tree trunk! Bwahahahaha! 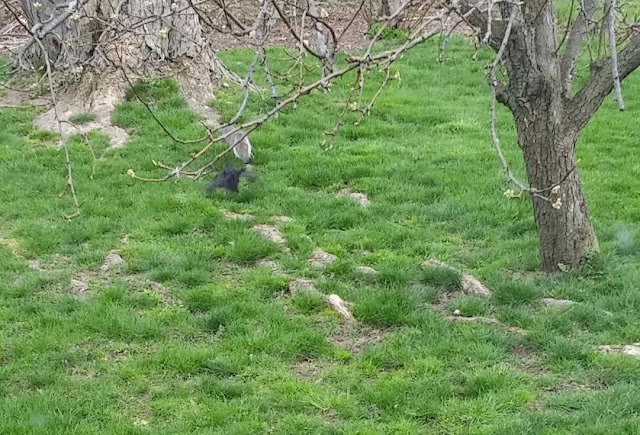 So that's why the squirrels are missing from my yard! Well, don't think that's the end of the story. Because check out this scenario: 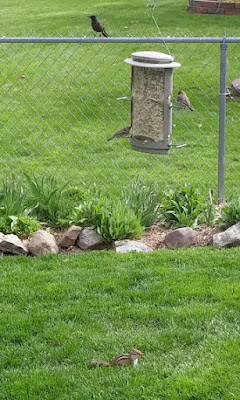 It's an operative from the Conniving Chipmunk Consortium! Yes, now a chipmunk has arrived to snarf the seeds that the grackles usually eat. Scatterstool got ready for another attack. He marched right up to him, but the chipmunk didn't move. 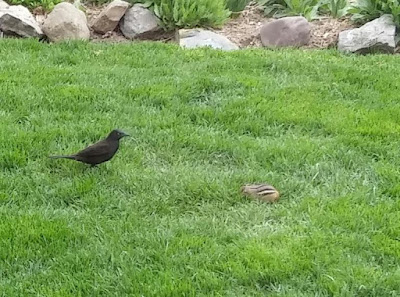 Those chipmunks must think they're pretty tough! He went on stuffing his face with seeds even when Scatterstool gave him his best stink eye! 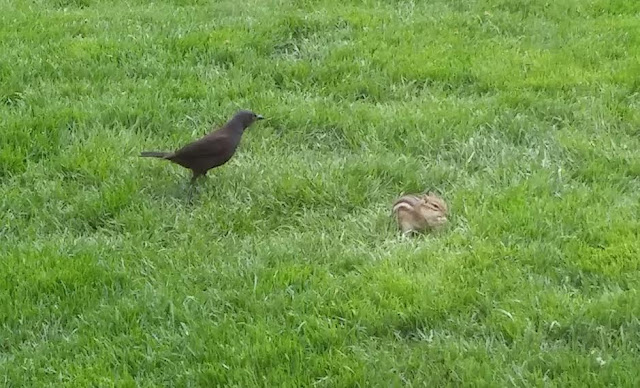 Scatterstool had to call for back-up. His wife, Squatty, arrived to help. 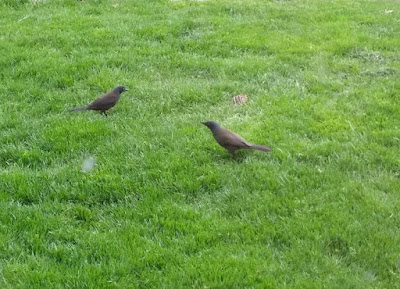 The chipmunk jumped up and the birds flew away!

Hahaha! The big bad grackles, who chased the squirrels away, were scared of a scrappy little chipmunk! But, a chipmunk is technically a squirrel. And a squirrel's a squirrel!
Time for a doggie intervention! 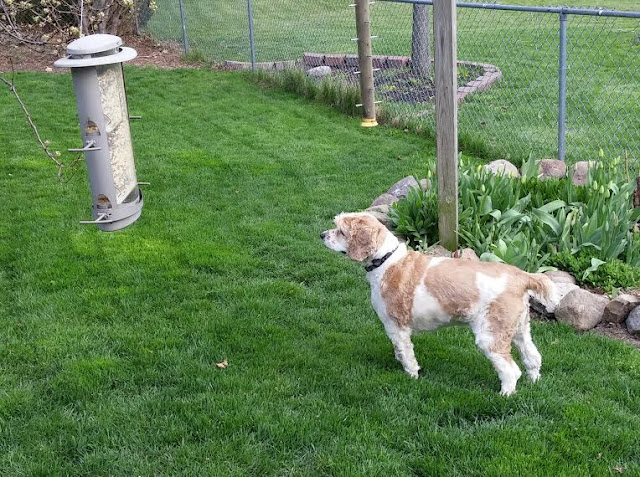 And stay out! Harumph! 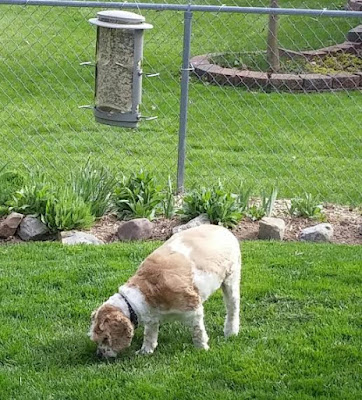 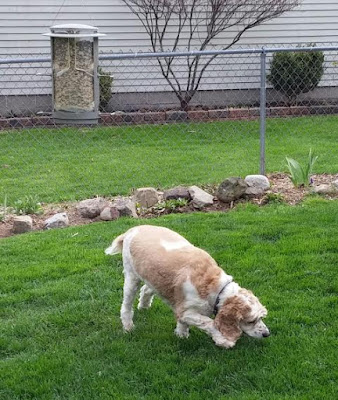 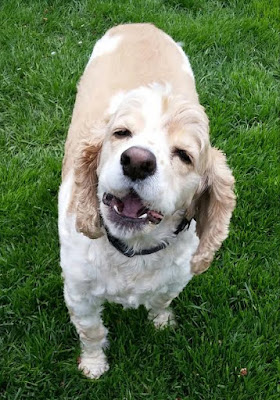 I love being a doggie!