Hello and welcome all fellow Americans! This is The Daily Bone, and I’m your faithful doggie host Chester L. W. Spaniel. Hang onto your squeaky toys, because today we’re reporting on the government shut down. 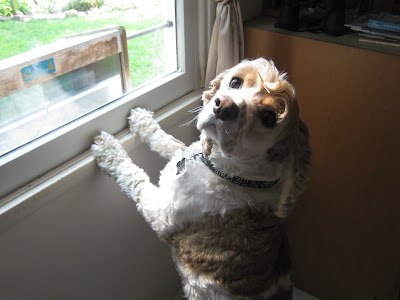 Oh no! The US Government has shut down! There will be rioting in the streets and armies of zombies will be running rampant just like all those end of the world (again) block buster movies from this summer. The media is creating a frenzy of blame and vilification, and are doing cartwheels of joy. Wow! A big news story to make money for them! I am reminded of an old cartoon in which Bugs Bunny is stuck in a big pot over a fire with jungle head hunters dancing all around it. Good grief! Come on people! Can’t you sit down and talk together and solve your differences like adults?

Meanwhile the war of the birds has begun. Look at this red cardinal sitting outside our window. He has been attacking the window and chirping angrily all morning. Who needs the Angry Birds video game? Earlier, squadrons of loudly trumpeting geese swooped through the skies awakening everybody in the house at the crack of dawn. There have been reports of gigantic flocks of starlings sitting on the telephone wires bombarding cars with purple poop. Yikes!


Well, since the government is shut down, my patriotic colleague Joseph (Joey dog) Spaniel and I are going on furlough for a while. We’re going to take a nice long nap and gather our energy for the Revenge of the Birds. Oh, and contemplate the plan for the Squeaky Party to take over before the Diabolical Debt Ceiling Crisis hits. And that’s a memo.