Greetings! This is The Daily Bone and I'm your disgruntled doggie reporter Chester L. W. Spaniel. 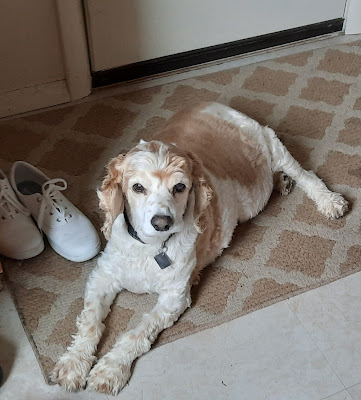 My ghostwriter has been working a lot lately. She had to work almost the entire Thanksgiving holiday weekend. She was originally scheduled to have turkey day off, but ended up working it anyway. Blah! Then Sunday night, she had to stay on until 3am! I've been guarding her white shoes so she will have to take her scheduled two days off! Grrrr!!!!

It's been raining most of the yesterday and today. But that didn't stop the Evil Squirrel Cartel from invading my yard and eating seeds the birdies drop from the feeders. Look how fat this one is! 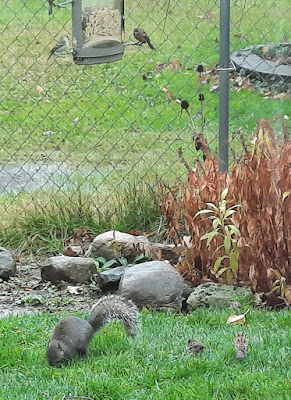 The little sparrows said this squirrel is named Madame Curie Potato-Chips because she thinks she's very smart—like the world famous scientist—but like a potato chip bag, she's all full of hot air. (I wonder how those birdies think up those silly names???)

Here's another squirrel that's been getting into the seeds dropped under the window box birdie feeder. 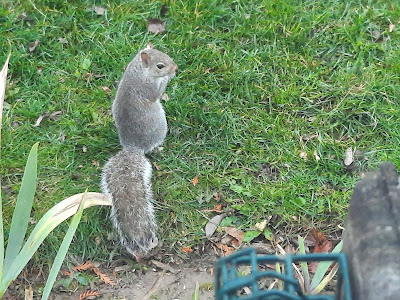 If memory serves, this one is named Einstein Dingaling. Dad says he's even seen this one jump right into the feeder!
Meanwhile, yet another squirrel has been destroying our pumpkin that's been sitting by the front door. What a mess! They're very sneaky and we have yet to catch them in the act. 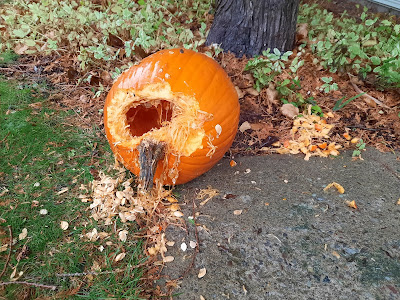 I'm not allowed to run in the front yard because there's no fence. But I'll keep up my watch in the back yard defending my little birdie friends' birdie seeds from the Evil Squirrel Cartel!

This is an exclusive, live update about the Evil Squirrel Cartel operative who has been eating our pumpkin! Please note the photos are blurry because the window on the storm door kept fogging up. 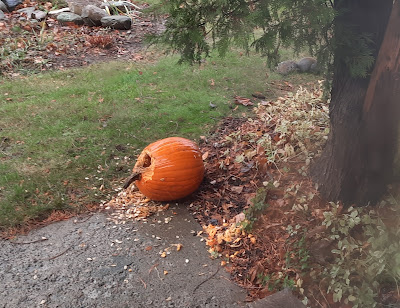 When my ghostwriter opened the front door to check for packages, she saw the culprit! He immediately began to flee. But then he came back and climbed up the arborvitae side stump. 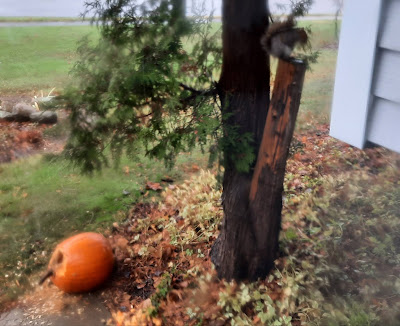 And there he sat, looking all innocent!

He finally took off when he heard me barking. Later, my little sparrow friend Winifred Seedcruncher said that this was the infamous Tesla Twitch from the other side of the neighborhood. Well, I can believe that since the local squirrels were never smart enough to chew up the pumpkin like that!

Hey squirrel, what ever your name is, your ride is here to take you back to your own territory! 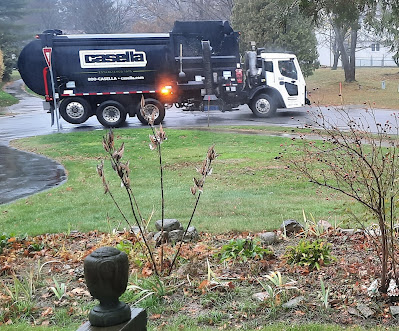