Good evening. This is a special report from The Daily Bone. I'm your excited doggie reporter
Chester L. W. Spaniel. As promised, today I will document the removal of the huge silver maple tree in my back yard. 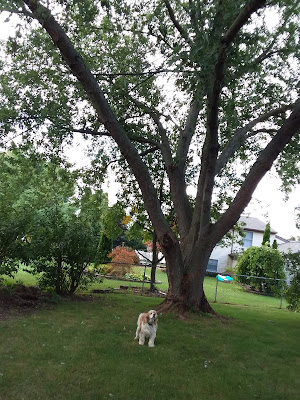 Here's a picture of me in front of the tree yesterday. Ghostwriter says the siblings planted it over 30 years ago when it was just a tiny seedling. It  grew quickly, and provided shade for many family events. 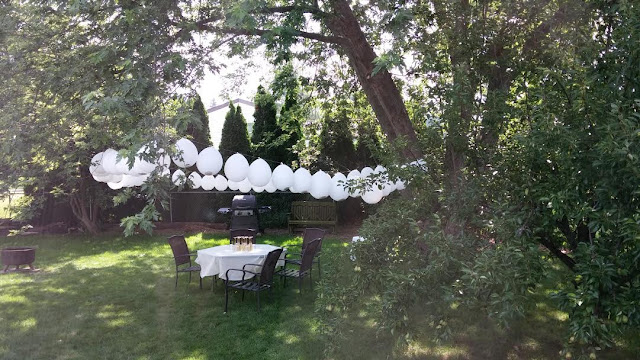 Eventually, it became a behemoth, with four main trunks, either of which could fall and do major damage to our house or our neighbors' yards if there was an ice storm.

Over the years, the Evil Squirrel Cartel has been trying to claim it for their headquarters, repeatedly building nests out of sticks and leaves, only to have Dad knock them down. They also like to scramble up it whenever I chase them away from the birdie feeders. Won't they be surprised when they find that tree is gone! 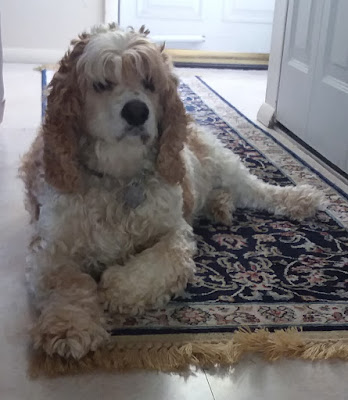 This morning, lots of trucks pulled up in front of our house, with several different big machines. The first guy on the job climbed part of the way up the tree, and started cutting branches with a chain saw. 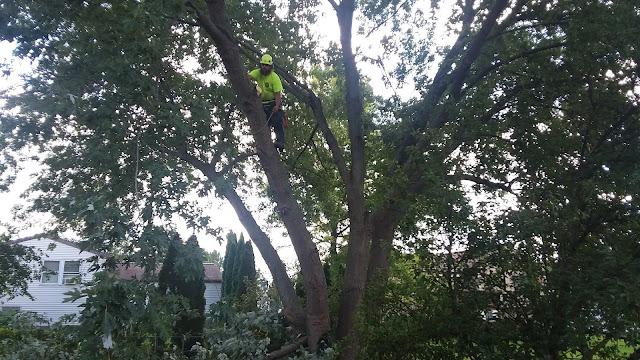 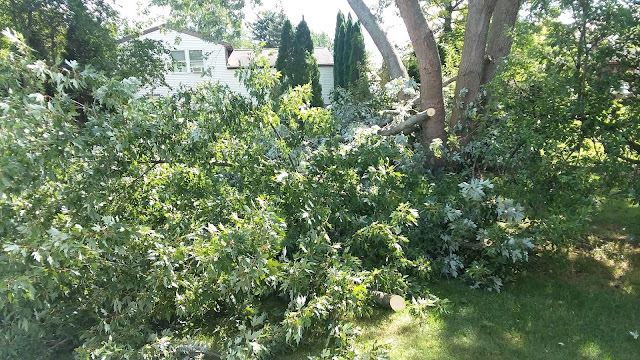 He had a few other guys to help clear away the branches. Next he drove this machine into the yard:

It had a not too terribly noisy motor that put down four legs to keep it steady. Then it literally unfolded until it looked like a preying mantis. There was a big bucket on the end that one man could fit into. 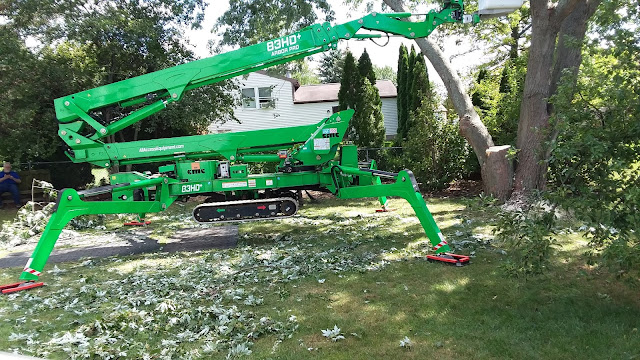 It lifted him way up high so he could reach the tree top. 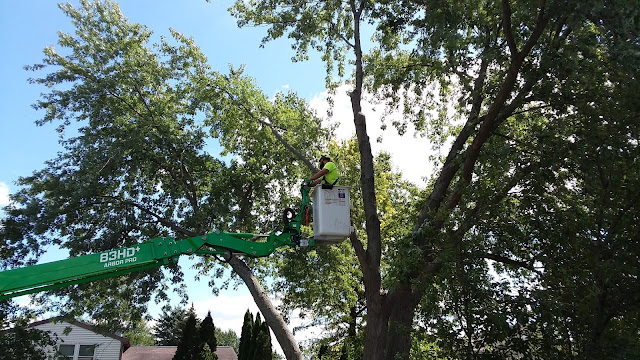 The branches that reached over our yard were no problem. They fell down onto the ground in our yard. But many of the other branches were extended out over the fences and the neighbors' trees and bushes. He needed to use a rope and pulley system, and lots of help from his team to get these down without hitting anything. In the next picture, you can see a limb coming down attached to a rope: 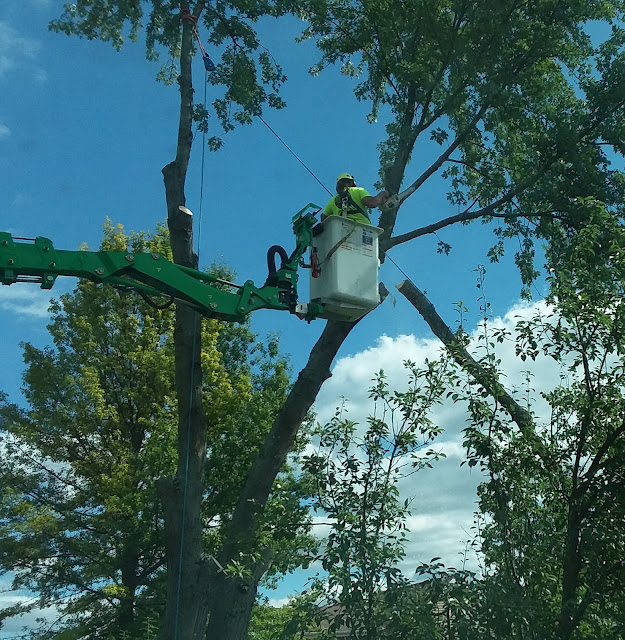 Another guy held the rope, with the help of a pulley, so that the branch could be lowered carefully to the ground. 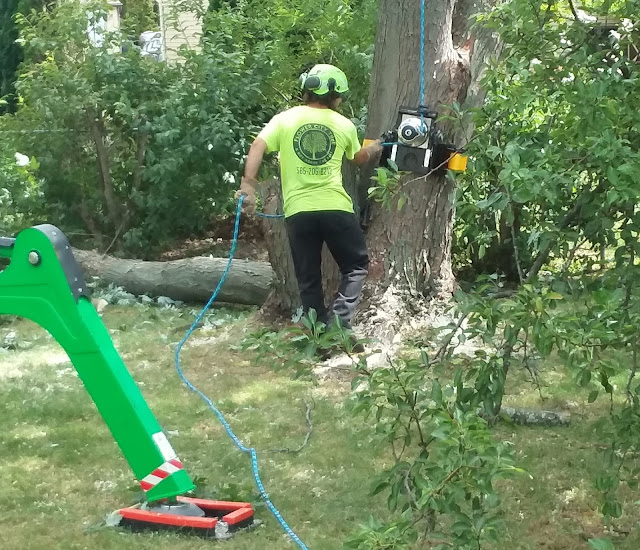 Sometimes he had to pull pretty hard to keep it steady! 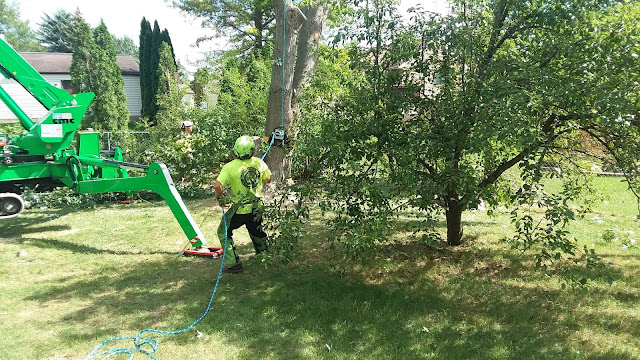 After all the over-hanging limbs were down, he began cutting off the two remaining trunks. Piece by piece, they fell down with an earth-shaking thump … 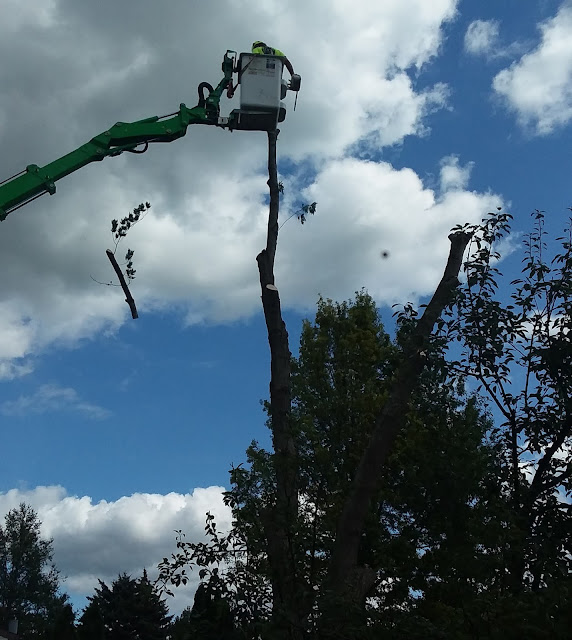 … until all that was left was the stump! 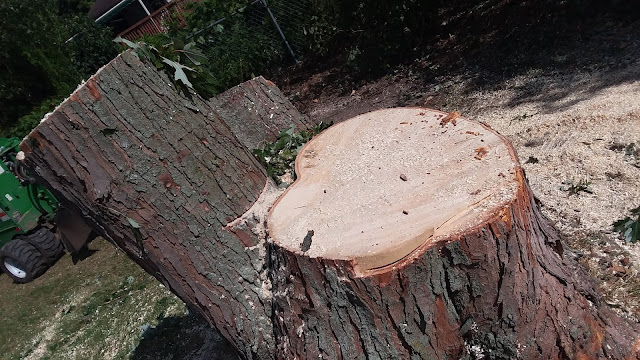 While all this was going on, another man drove around in a machine called a Dingo, that picked up the felled branches and took them to the front yard. 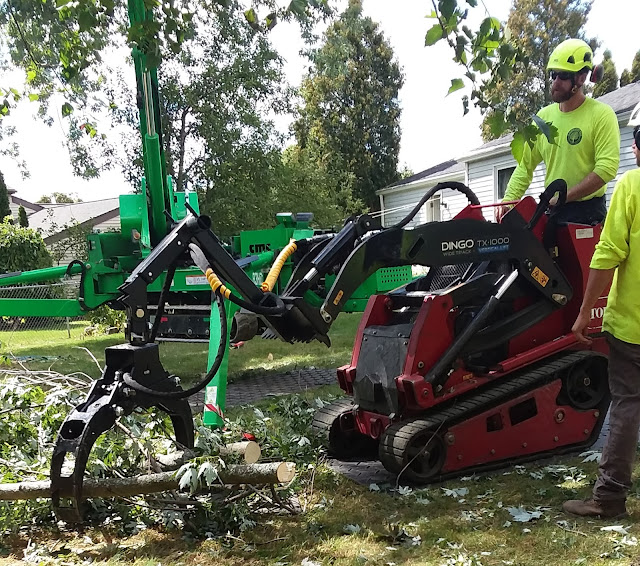 Don't be fooled by its small size. That Dingo could lift even the heaviest tree trunks! 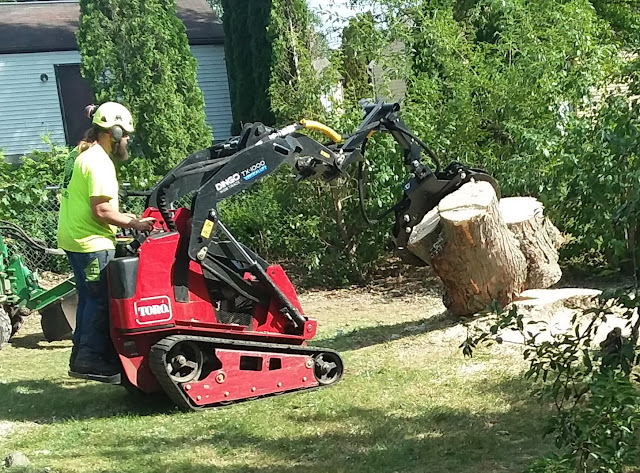 Most of the branches were ground into chips by this super noisy screeching machine:

The bigger logs were piled up by the curb, until they were picked up and loaded into yet another truck: 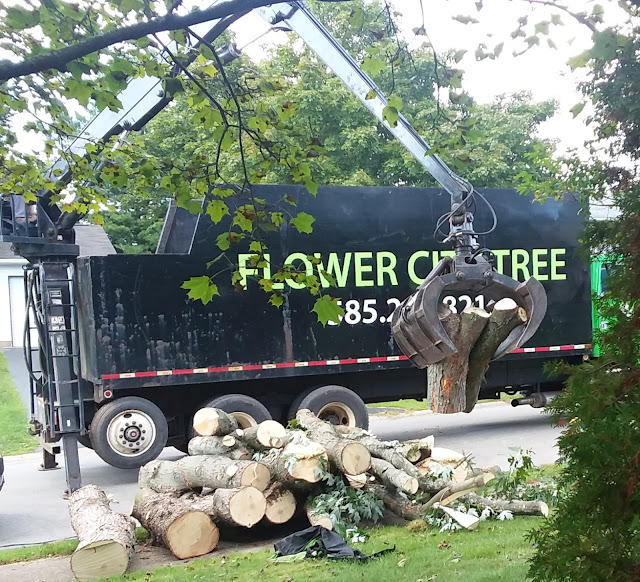 In case you're wondering, I spent a lot of time running and barking back and forth from the front door to the kitchen window. I think I did a good job supervising. The entire job took about six hours, and the team worked together like a well-oiled machine! Ghostwriter wondered where they found such hard-working folks for a tough job like that. 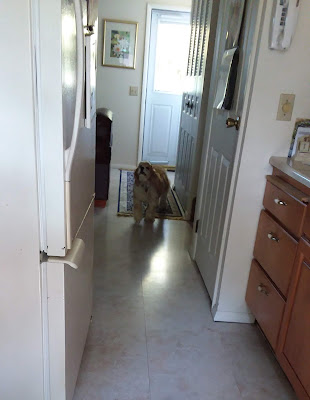 But they weren't done yet! There was still this last piece to get out of the ground: 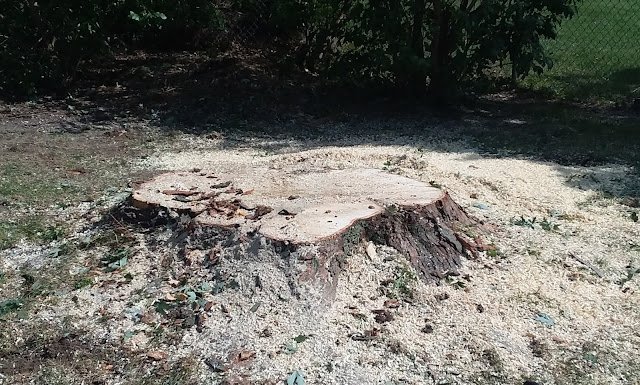 Another roaring dragon loud machine thing named Bandit arrived, and in a short time, ground down this stump into a big heap of wood chips.

Then the Dingo came back, after exchanging its lifter claw for a shovel, and took most of the wood chips away. Dad asked the guys to leave some of the chips so we could use them as mulch. 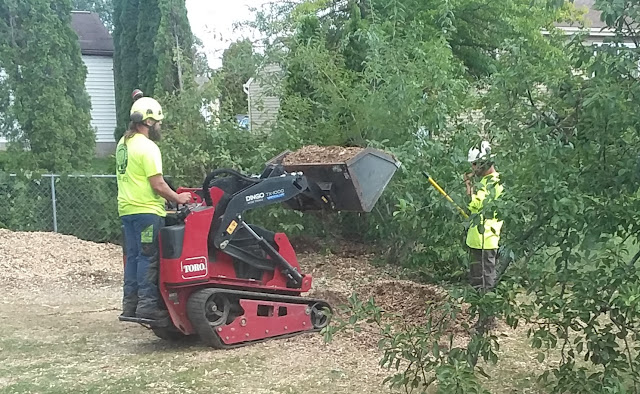 Now, here's the spot where the monster tree used to be: 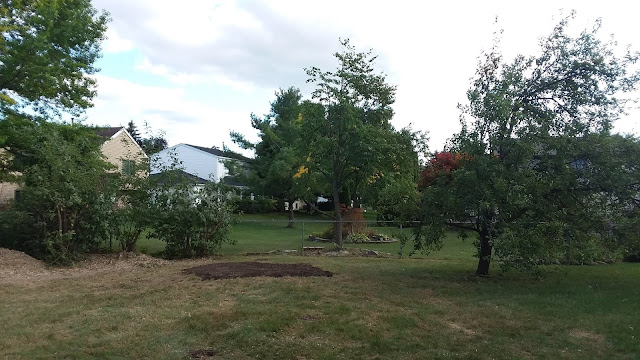 They also removed the dying spruce tree in the front yard. But that one only took them a short time! 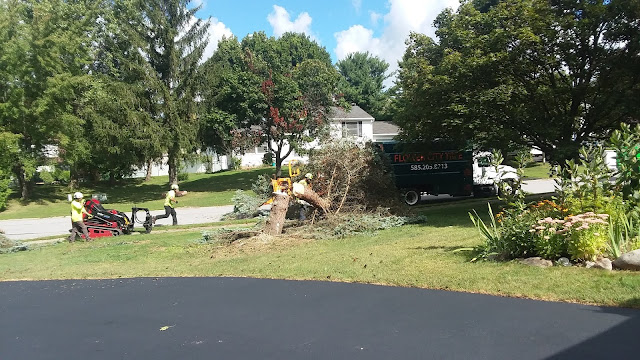 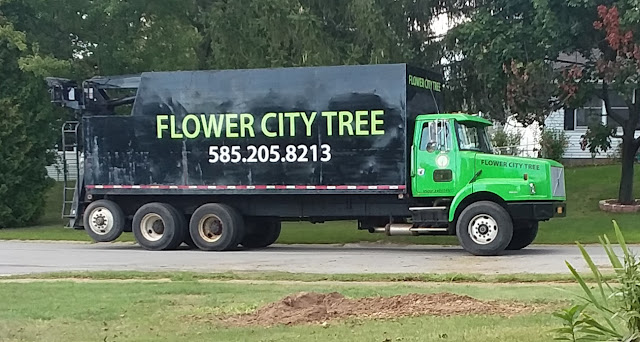 What an exciting day! 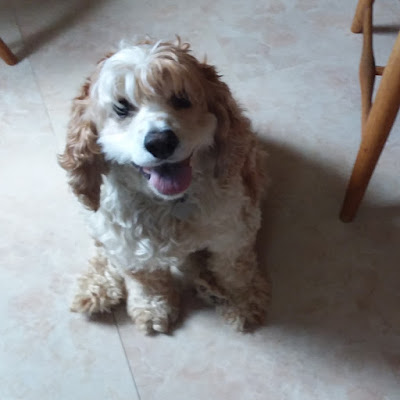