Hello everyone. This is The Daily Bone and I'm your hard-working doggie reporter
Chester L. W. Spaniel. 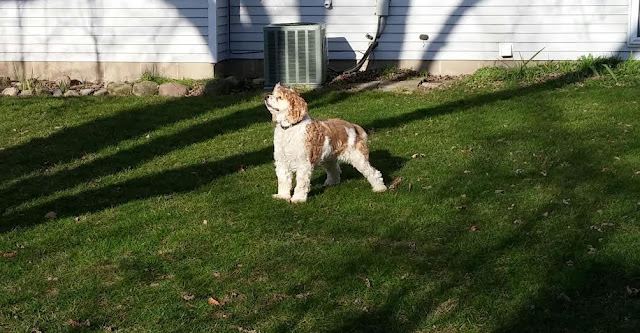 The weather was warm today, 60º and clear with the sun shining brightly. 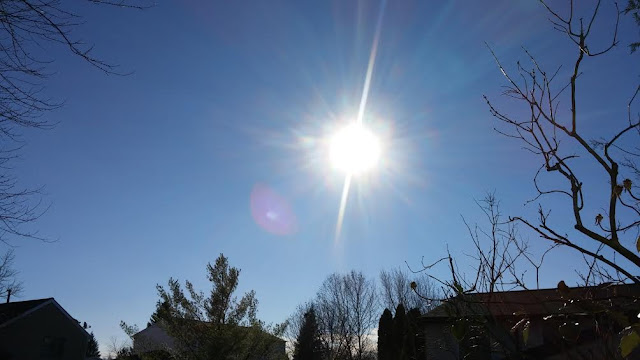 I have been a busy doggie because the Evil Squirrel Cartel was out in force! There was not one, not two, but three of them chowing down on our beautiful hawthorn berries that the birdies need to get them through the winter. (After what one of them did to our dear Oma's Christmas package yesterday, I'm extra angry with them!) 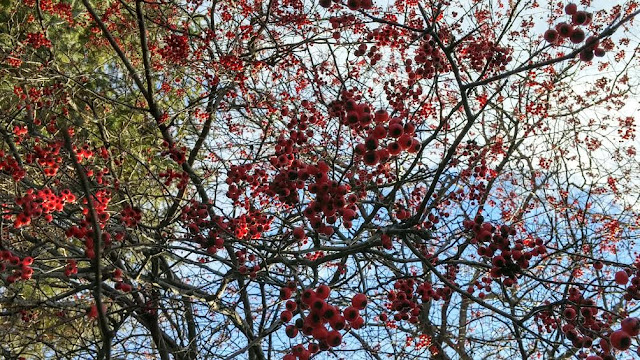 I ran and chased them out of the hawthorn tree. 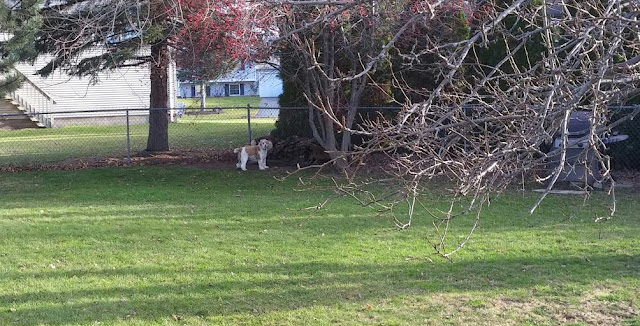 They were real dummies and didn't know which way to go. Two of them bumbled around in the blue spruce tree. The third one ran up the silver maple tree. He didn't realize that now that the leaves are all gone, I can see him up there. 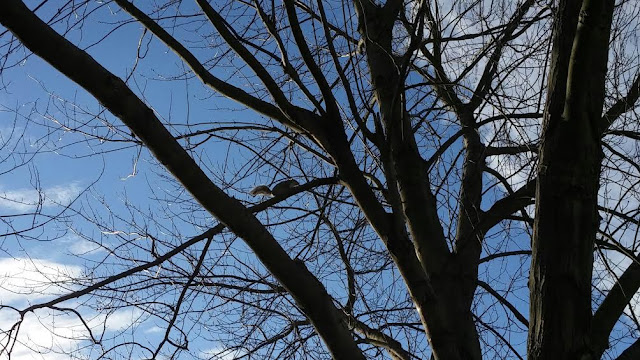 Hah! Diabolical tree rat! There you are! I hope you like it up there because I intend to bark for a long, long time! 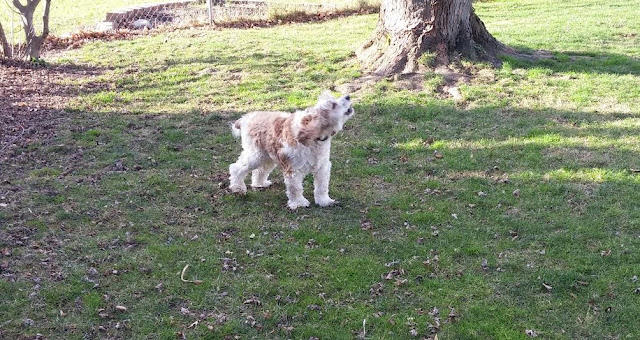 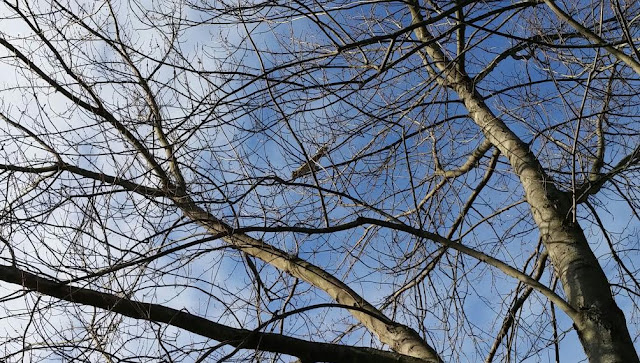 You can run but you can't hide! 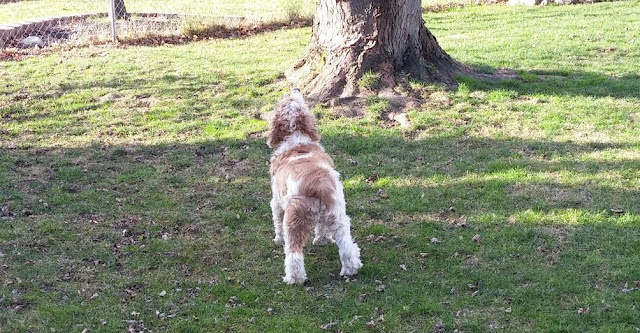 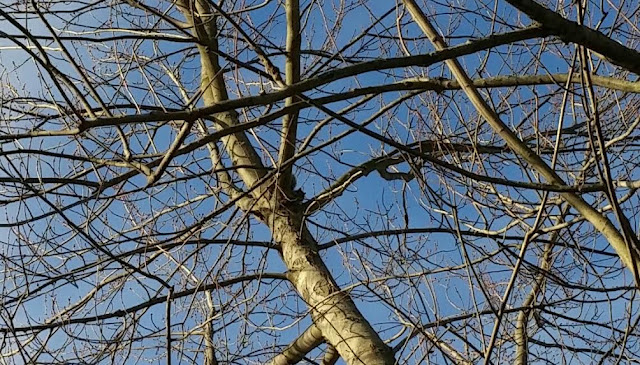 I see you peeking from behind those branches! 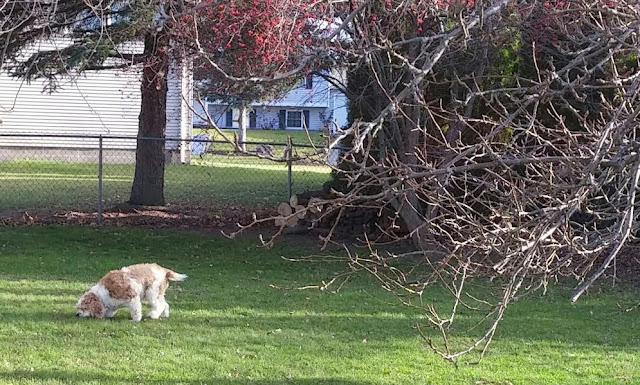 He finally made a break for it and I chased him right out of the yard! Dastardly miscreant! Harumph! Next, I spent some time sniffing around for squirrel foot prints until it was time for me to go back inside the house. 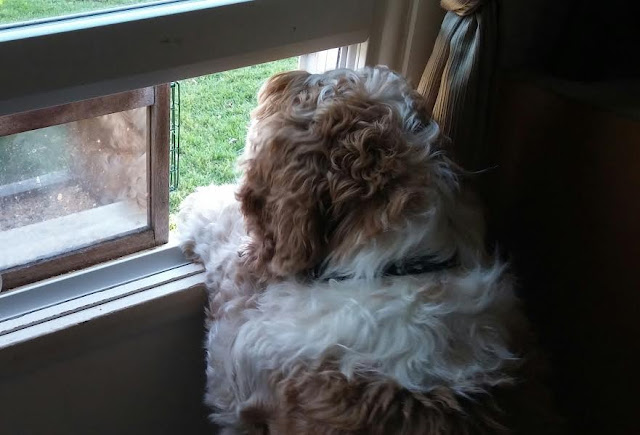 I kept watch through the drive-through barking window. Since it was so warm out, I was allowed to keep it open. While I'm watching, please enjoy some photos of our lovely day.

Oh, you may be wondering where my esteemed colleague Joseph (Joey dog) Spaniel was during all this squirrel crisis. He's gone on partial retirement from the Double Doggie Homeland Security System, due to the problems with his legs. As you might remember, his legs seem to  sometimes slide out from under him when he's standing on a bare floor. But lately it seems he sometimes falls down even when he's standing on a carpet or grass too. So we decided that I would take over most of the running and barking duties. He's almost 14 years old now. He's earned some rest and relaxation. Here he is enjoying the warm sun and the wind in his fur. 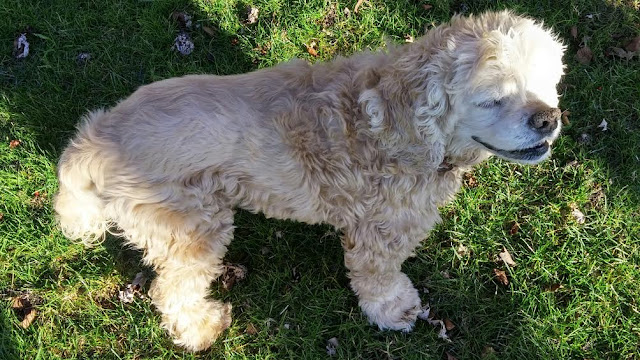 However, he has not retired from being the Doggie Chief Inspector, comestibles division, and will be doing a report tomorrow. Please stay tuned!