This is The Daily Bone, and I’m your humble doggie host, Chester L. W. Spaniel, chairman of the squeaky party. We believe the world would be a better place if everybody had a squeaky toy!


The strangest thing happened today. A couple of my humans came over with what I thought was a giant squeaky toy. I mean, it made squeaky noises, and was nestled inside soft, fuzzy cushions and blankets. Of course, in my house the policy is that all incoming squeaky toys are to be remanded to my custody immediately for inspection and squeaky removal. That’s my job, and I take it very seriously. But, as much as I barked and demanded it be given to me, I was not allowed to touch it. I spent at least an hour in total confusion. My humans kept passing it around and talking to it, and reminding me continuously to stop barking and whining.

Finally, after much effort to control my curiosity and mounting anxiety, I was able to take a closer look at the special squeaky toy. To my surprise, it had eyes, and tiny hands. It had ears that when I licked them, tasted exactly like a human’s ears. It had breath that smelled like it had been eating a milk product of some kind. My much more patient and less excitable associate, Joseph (Joey dog) Spaniel, founder of the local Yum Yum Coalition, and resident breath analysis expert, confirmed my finding on this. It made funny little noises that didn’t sound like a standard squeaky toy. After a while, I realized that this was, in fact, a miniature human. Wow, I didn’t know they came in such a small size! How very interesting. So I guess things turned out all right after all. And that’s a memo. 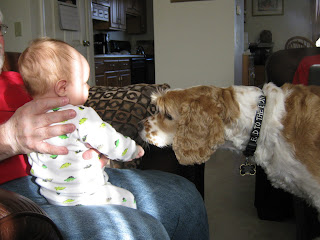 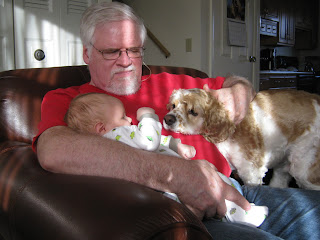