Hi everybody! I’m Chester L. W. Spaniel, chairman of the Squeaky Party, and this is The Daily Bone.

There is a TV show my humans have been watching called Dr. Who. This is an example of science fiction, which means it’s about what someone thinks the future might be like according to science. There is a guy who flies around through time and space in a box that’s bigger on the inside than on the outside. For some reason, there are always evil aliens intent on destroying the Earth, the Universe in general, or London in particular. Many of these aliens especially enjoy crawling into peoples’ brains and messing them up. The show features lots of intense music and the characters are constantly in a state of extreme crisis. I’ve given up trying to imagine how this Doctor manages to break every rule of logic, science, and physics. My humans say that it’s because he’s from the future and has figured out how to conquer all that stuff; and besides, it’s all just pretend anyway.

It seems humans love to pretend, but we doggies don’t understand that concept. In fact, we find it quite despicable when one of our humans pretends to throw the squeaky ball, when he actually has it hidden behind his back. The Easter Bunny, those weirdo  Halloween invaders, and the big fat guy who says ho ho ho all the time are more examples of pretending. My astute colleague, Joseph (Joey dog) Spaniel and I both agree, humans dressed in costumes are just scary and therefore should be barked at, or at least regarded with extreme suspicion and skepticism. Furthermore, the humans spend so much time watching TV that Joey dog and I wonder how they can tell what is real and what is pretend.

I heard somewhere that String Theory has something to do with alternate dimensions and universes. So I thought maybe if I studied that, then I might understand how Dr. Who can step into the front door of his special box that’s parked in someone’s backyard, and then step out and be suddenly inside of an airplane that’s crashing into London. I spent a whole hour seriously contemplating a string. I ran around with it, gave it a good shake, chewed on it for a while, and then just stared at it. I can truthfully conclude that it absolutely did not transport me to another dimension. Humph! This is going to take some further study, but not until after a nice long nap!

But what if it did? How would I know? 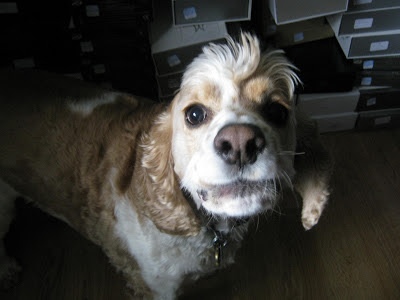