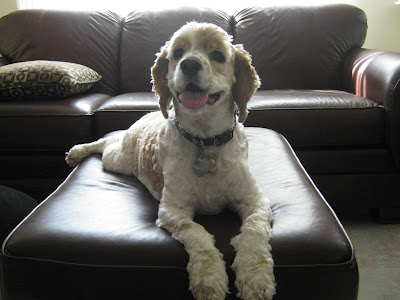 Hi everybody! This is The Daily Bone, and I'm your humble doggie host, Chester L. W. Spaniel. Well, it’s been almost a year since I started writing The Daily Bone. I could not have done it without the wonderful support and encouragement of my loyal fans. Today I'd like to take some time to tell you about one of them. 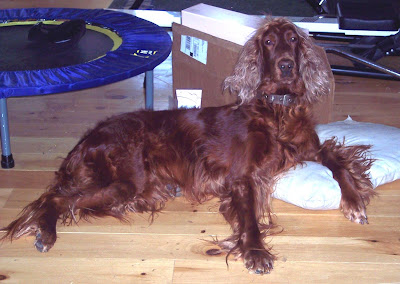 The Lady Galadriel lives in Florida with her two humans, where she is treated like royalty. She certainly looks regal in her photo here! Isn't she beautiful? I asked her what her favorite squeaky toy was, and she said she doesn’t have one. She absolutely loves yum yums, though. It sounds like she might want to give some serious thought to joining the Yum Yum Coalition, headed by my astute colleague Joseph (Joey dog) Spaniel, where yum yums are serious business. I also wondered about that round thing she’s sitting next to in her photograph. She told me it’s a trampoline, and her humans use this to jump up and down in one place. (Hmmm, that sounds about as puzzling as the yoga one of my humans does. Why someone would want to be upside down and twisted up like a pretzel is beyond me! Humans sometimes do weird things.) Oh, maybe she could use that trampoline to jump into the trees and catch some evil squirrels. That’s what I would do with it. She replied that she was too dignified to do that, and besides, her human is now skilled enough at jumping to do the job for her. Now that I think about it, one of my humans uses a ladder to climb up in the tree so that he can knock out that unsightly squirrel's nest every now and then, and sometimes blasts it with the hose too. Imagine the destructive power he could wield if he put the ladder on the trampoline and took the hose up with him! That would scare the crap out of those despicable squirrels. Bwa ha ha ha ha! No squirrel will come within miles of our house ever again, and then Joey dog and I could lounge around on a pillow like Lady. Wow, great idea Lady! Hooray!