Angus and the Bunny Militia

Welcome. You’ve tuned into The Daily Bone, and I am your humble doggie host Chester L. W. Spaniel, chairman of the Squeaky Party. We believe squeaky toys are the key to world peace.

Today I’d like to introduce another one of our wonderful fans. This is DCI (doggie chief inspector) Angus, and he lives in North Carolina with his two humans. Angus is an immigrant who came here all the way from the UK. He rode inside a doggie carrier, pictured below, aboard a big, giant airplane all by himself and flew across the Atlantic Ocean to be with his humans in their new home. I cannot even imagine the bravery it took to do that! 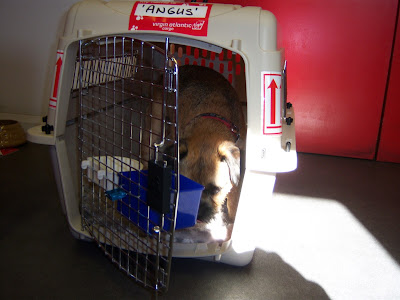 Now that he’s in the USA, some of his favorite things to do are sunbathing on the porch, going for long walks, and chasing squirrels and bunnies.

As you know, my astute colleague Special Agent Joseph (Joey dog) Spaniel and I are keen on chasing varmints off our property too. Our days are often filled with surveillance, crime scene investigation, profiling, and high speed chases in our on-going effort to protect our borders and property. The evil Squirrel Cartel, the CCC (Conniving Chipmunk Consortium) and the devious Mousies have a specific motive for invading our territory, namely larceny. They are constantly devising new plans to steal bird seeds, sunflowers, pine cones, and pears. The Bunny Militia, however is much more mysterious. We doggies have yet to figure out their motive for crossing our borders, which, incidentally, are surrounded by chain link fences, and clearly marked with our chemical signatures. After much research, the only item bunnies seem interested in stealing from us is the occasional dandelion stem, which hardly seems worth such a dangerous mission. Therefore, Joey dog and I have postulated that the Bunny Militia must be a cult run by a high priest, and that their religious right of passage includes a suicide mission into enemy territory. (Cue the X-Files theme.) Similar behavior is practiced by the Future Roadkill Club of America, whose members are mostly deer, opossums, raccoons, and woodchucks. I have caught two Bunny Militia operatives so far during my career. When caught, they emit an unearthly scream to alert their elders that they have completed their mission and are now proceeding to bunny heaven or nirvana of some type. That was eerie enough to send Joey dog running back into the garage. I, however, was neither distracted nor deterred by this. As you can see in the next photo DCI Angus wasn’t either. Good show, old chap!

I asked Angus if he is ever troubled by the memories of dispatching a Bunny Militia operative in the line of duty, or by flashbacks of his harrowing airplane trip over the ocean. He says he tries to only think about good things, like running in the grass with his girlfriend Daisy. Great idea, Angus! Thank you for being a fan of The Daily Bone. 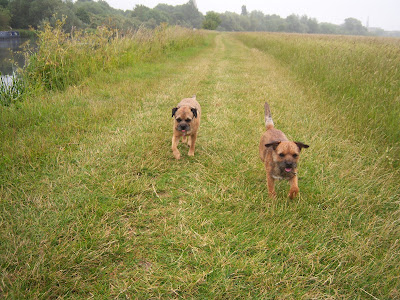